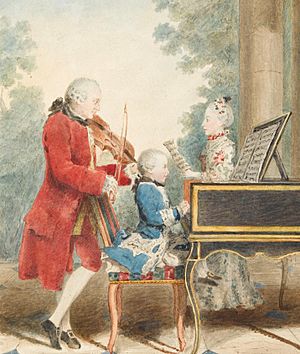 Wolfgang Amadeus Mozart (seated at the keyboard) was a child prodigy virtuoso performer on the piano and violin. Even before he became a celebrated composer, he was widely known as a gifted performer and improviser.

The Classical music period is the time from about 1750 to 1820 when Haydn, Mozart, Beethoven, and Schubert were the most famous living composers.

This article is about “Classical music” in the late 18th century and the early 19th century. The word “classical” is often used to refer to the arts of Ancient Greece and Rome. It has also come to mean any art form which has become very famous and is remembered for centuries afterwards. In music the Classical period comes between the Baroque and the period of Romanticism.

In some ways Classical music is often simpler than the music of the Baroque composers. There is often a tune with a simple accompaniment using broken chords called an “Alberti bass”. For classical composers the form of the piece was very important. Composers started their work with a tune (theme) and this tune would be developed in different ways: put in different keys, changed from a fast to a slow tune, changed from major to minor or from minor to major.

The opening of this sonata by Mozart shows a typical classical tune over an Alberti bass.

Some of the most famous composers of the Classical period in music are:

All content from Kiddle encyclopedia articles (including the article images and facts) can be freely used under Attribution-ShareAlike license, unless stated otherwise. Cite this article:
Classical music period Facts for Kids. Kiddle Encyclopedia.