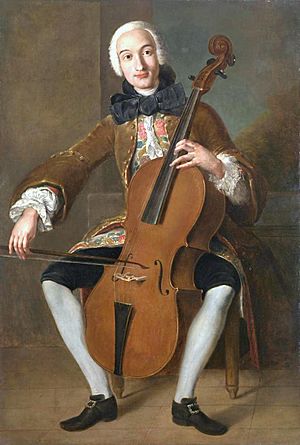 Portrait of Luigi Boccherini playing the cello (by an unknown artist, around 1764-1767)

Luigi Boccherini (born in Lucca, 19 February 1743; died Madrid, 28 May 1805) is an Italian cellist and composer. As a boy he showed great talent and was sent to Rome to study music. When he returned to Lucca he entered the theatre orchestra and the town band. He travelled a lot, visiting France, Spain, and Germany. In Berlin he was offered the job of chamber composer to the King of Prussia. He took the job, but had to promise only to work for the king, and no one else. When the king died he found himself without a job, so he went back to Madrid. There he found work at times, but a lot of the time he was very poor.

Boccherini is famous for his chamber music. He wrote more than 100 quintets for 2 violins, viola and 2 cellos. He also wrote 4 cello concertos.

Boccherini is sometimes nicknamed "Haydn’s wife" because his music sounds similar to that of Haydn. They may have known one another, but we cannot be sure.

All content from Kiddle encyclopedia articles (including the article images and facts) can be freely used under Attribution-ShareAlike license, unless stated otherwise. Cite this article:
Luigi Boccherini Facts for Kids. Kiddle Encyclopedia.