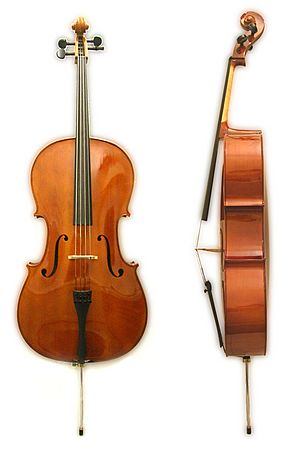 A cello from the front and side

The cello is an instrument used to play music. Its name comes from the Italian language, so it is pronounced “chello”. The full word is violoncello, but when speaking, people normally call it the “cello”. A person who plays the cello is called a “cellist”. The cello is a very popular instrument. It belongs to the string family. It has many uses: as a solo instrument, in chamber music and also in orchestras. It is also occasionally used by pop musicians, e.g. by The Beatles, Björk and Jamiroquai.

The cello came into use in the 16th century. At that time there was a family of instruments called the viols. The instruments of the violin family were also developing and there were lots of experiments with instruments of different shapes and sizes. The violone was popular as a bass instrument. It was similar to a modern double bass. The name violoncello, means "little violone". The cello also has 4 strings. The cello developed as the bass instrument in string groups (the double bass was added later, “doubling the bass” i.e. playing the same as the cello an octave lower). It was used to accompany in basso continuo, playing the same as the left hand of the harpsichord player. When composers started to write concerti grossi (pieces for orchestra and a small group of soloists), they started to give the cello small solos. In this way the cello started to be used as a solo instrument as well. Johann Sebastian Bach wrote six very famous suites for solo cello (unaccompanied). They are among the most beautiful pieces written for the cello.

Other composers started to write works for solo cello. Joseph Haydn wrote two solo concertos for the instrument. King Friedrich Wilhelm II of Prussia loved the cello, and he inspired Haydn, Mozart and Beethoven to write music with interesting cello parts. The cello was now an equal with the other string instruments, no longer just playing a simple bass line. 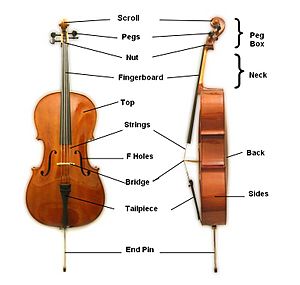 The parts of a cello

The parts of the cello are similar to those of the violin. The strings are tuned to C-G-D-A, (low to high). The cello is played sitting down and holding the instrument between the knees. There is an end-pin which rests on the ground. This is adjustable in height so that the player can put it in a position to make himself/herself comfortable. The cello is normally played with a bow.

The cello has a deep, rich sound. It starts two octaves below middle C, but can go very high. For the highest notes the player can use “thumb position” (a violinist cannot do this). This means that the left thumb is pressing down on one or two strings high up over the fingerboard (“high” means “nearer the bridge” where the high notes are. In fact, it is nearer to the floor). Although cello music is most frequently written in the bass clef, cello music often goes quite high so that the tenor clef is used especially in the solo repertory.

The most famous cellist of the early part of the 1900s was the Spanish cellist Pablo Casals. He made the cello popular as a solo instrument today. Casals also discovered the famous Suites for cello by J.S. Bach which had been lost.

All content from Kiddle encyclopedia articles (including the article images and facts) can be freely used under Attribution-ShareAlike license, unless stated otherwise. Cite this article:
Cello Facts for Kids. Kiddle Encyclopedia.