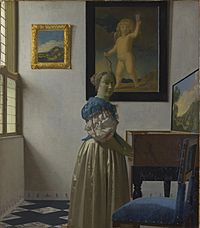 Portrait of a girl playing a virginal

Harpsichords are keyboard instruments that make sound by having the strings plucked with a plectrum. They are thought to have originated when a keyboard was attached to a psaltery. This makes them different from a clavichord where the strings are hit. The piano is therefore closer to a clavichord than a harpsichord.

On a piano it is possible to play louder or quieter by playing the keys with more or less force. On a harpsichord the volume (playing louder or softer) cannot be controlled by the way it is played. However, some large harpsichords have several "stops", each one giving a different kind of sound. The largest harpsichords have two manuals (keyboards) which gives more variety. It makes it possible for the right hand to play the tune on one manual while the left hand plays an accompaniment more quietly on the other.

Some small harpsichords were called "virginals", perhaps because they were played by young girls. There are also spinets which were very small and sometimes wing-shaped. They could be picked up and put on a table.

Harpsichords were very important in music from the Renaissance and Baroque periods. They were used as solo instruments as well as to accompany an orchestra. Some of the most famous composers of harpsichord music are William Byrd (1543-1623), François Couperin (1668-1733), Domenico Scarlatti (1685-1757) and Johann Sebastian Bach (1685-1750).

In modern usage, "harpsichord" can mean any member of the family of instruments. More often, though, it specifically denotes a grand-piano-shaped instrument with a roughly triangular case accommodating long bass strings at the left and short treble strings at the right. The characteristic profile of such a harpsichord is more elongated than a modern piano, with a sharper curve than the bentside.

The virginal is a smaller and simpler rectangular form of the harpsichord having only one string per note; the strings run parallel to the keyboard, which is on the long side of the case.

A spinet is a harpsichord with the strings set at an angle (usually about 30 degrees) to the keyboard. The strings are too close together for the jacks to fit between them. Instead, the strings are arranged in pairs, and the jacks are in the larger gaps between the pairs. The two jacks in each gap face in opposite directions, and each plucks a string adjacent to the gap.

The English diarist Samuel Pepys mentions his "tryangle" several times. This was not the percussion instrument that we call triangle today; rather, it was a name for octave-pitched spinets, which were triangular in shape.

A clavicytherium is a harpsichord with the soundboard and strings mounted vertically facing the player, the same space-saving principle as an upright piano. In a clavicytherium, the jacks move horizontally without the assistance of gravity, so that clavicytherium actions are more complex than those of other harpsichords. 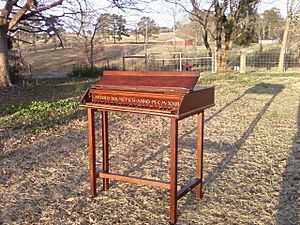 An ottavino built by Arnold Dolmetsch in 1923, and modeled after a 1698 instrument by Joannes Carcassi

Ottavini are small spinets or virginals at four-foot pitch. Harpsichords at octave pitch were more common in the early Renaissance, but lessened in popularity later on. However, the ottavino remained very popular as a domestic instrument in Italy until the 19th century. In the Low Countries, an ottavino was commonly paired with an 8' virginals, encased in a small cubby under the soundboard of the larger instrument. The ottavino could be removed and placed on top of the virginal, making, in effect, a double manual instrument. These are sometimes called 'mother-and-child' or 'double' virginals.

The folding harpsichord was an instrument that could be folded up for travel.

Pedal Harpsichord: Occasionally, harpsichords were built which included another set or sets of strings underneath and operated by pedals which pluck the lowest keys of the harpsichord.

All content from Kiddle encyclopedia articles (including the article images and facts) can be freely used under Attribution-ShareAlike license, unless stated otherwise. Cite this article:
Harpsichord Facts for Kids. Kiddle Encyclopedia.