The clavichord is a European stringed keyboard instrument that was used largely in the late Medieval, through the Renaissance, Baroque and Classical eras. Historically, it was mostly used as a practice instrument and as an aid to composition, not being loud enough for larger performances. The clavichord produces sound by striking brass or iron strings with small metal blades called tangents. Vibrations are transmitted through the bridge(s) to the soundboard.

The clavichord was invented in the early fourteenth century. In 1504, the German poem "Der Minne Regeln" mentions the terms clavicimbalum (a term used mainly for the harpsichord) and clavichordium, designating them as the best instruments to accompany melodies. 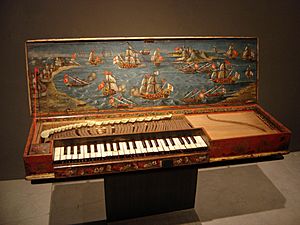 To play a note on the clavichord a key is pressed down. This makes the other end of the key (inside the instrument) comes up (like a see-saw). That end has a thin metal blade called a "tangent" which hits the string. The tangent stays on the string until the player takes his finger off the key.

The clavichord is a very quiet instrument. It was not suitable for playing with other instruments because it was so quiet. But it sounds very beautiful in slow, expressive music. It was used as a practice instrument by harpsichord players, or by organists who wanted to practice at home instead of in a (often very cold) church.

They were so small that they could be lifted up and put on a table. They could be put one on top of another so that an organist could practice music written for a two-manual organ. Sometimes they even had pedals for organists to practice this skill.

Many German composers like Johann Sebastian Bach wrote music for the “Clavier”. This meant any keyboard instrument: harpsichord, clavichord or organ. The player could choose which they wanted to use.

The clavichord has also gained attention in other genres of music, in the form of the Clavinet, which is essentially an electric clavichord that uses a magnetic pickup to produce a signal for amplification. Stevie Wonder uses a Clavinet in many of his songs, such as "Superstition" and "Higher Ground". A Clavinet played through an instrument amplifier with guitar effect pedals is often associated with funky, disco-infused 1970s rock.

Guy Sigsworth has played clavichord in a modern setting with Björk, notably on the studio recording of "All Is Full of Love". Björk also made extensive use of and even played the instrument herself on the song "My Juvenile" of her 2007 album Volta.

Tori Amos uses the instrument on "Little Amsterdam" from the album Boys for Pele and on the song "Smokey Joe" from her 2007 album American Doll Posse. Amos also featured her use of the Clavinet on her 2004 recording "Not David Bowie", released as part of her 2006 box set, A Piano: The Collection.

All content from Kiddle encyclopedia articles (including the article images and facts) can be freely used under Attribution-ShareAlike license, unless stated otherwise. Cite this article:
Clavichord Facts for Kids. Kiddle Encyclopedia.