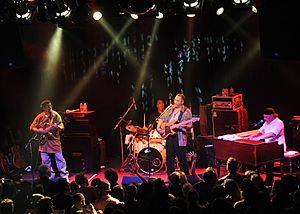 The rhythm section of a funk band--the electric bass, drums, electric guitar and keyboards--are the heartbeat of the funk sound. Pictured here is The Meters.

Funk is a type of music from the United States that was developed the 1960s by African American musicians and singers such as James Brown, Sly and the Family Stone, George Clinton, and The Meters. Funk music emphasizes the rhythm of the music. Funk music mixes Rhythm and Blues music with soul music. Funk music is dance music.

Funk uses many rhythm instruments, such as electric guitar, bass guitar, drums, and electric organ. Funk bands also have a horn section, which includes several saxophone players, a trumpet player, and in some bands, trombone players.

Role of the electric bass 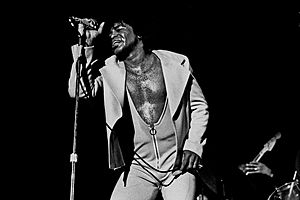 The United States singer and musician James Brown was one of the first funk musicians. James Brown recorded a song in 1965 called "papa's got a brand new bag" which is considered the first funk song. Other musical groups copied the rhythms and musical style developed by James Brown and his band. A band called The Meters played funk music in New Orleans. The Meters had hit songs such as "Sophisticated Cissy" and "Cissy Strut" in 1969. Another funk group, The Isley Brothers, had a hit song in 1969 called "It's Your Thing". 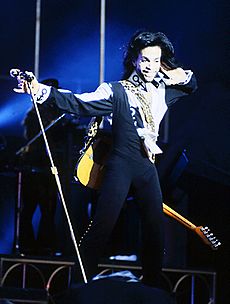 Prince was an influential multi-instrumentalist, bandleader, singer and songwriter.

In the 1980s, funk music changed. Funk musicians began using electronic instruments such as synthesizer keyboards and electronic drum machines instead of electric bass, electric organ, trumpets, saxophones, and drums. Rick James had hits in the 1980s with funk songs such as "Give It To Me Baby" and "Super Freak." The band Queen had funk songs such as "Another One Bites The Dust." The musician and singer Prince had hit songs.

Some major names of early 80s funk include: Cameo, Zapp, The Gap Band, The Bar-Kays, and The Dazz Band.

All content from Kiddle encyclopedia articles (including the article images and facts) can be freely used under Attribution-ShareAlike license, unless stated otherwise. Cite this article:
Funk Facts for Kids. Kiddle Encyclopedia.