Rhythm, a sequence in time repeated, featured in dance: an early moving picture demonstrates the waltz. 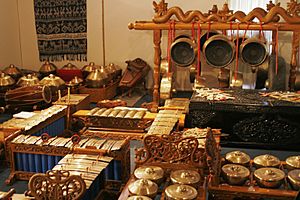 Rhythm refers to the length of time between each major "beat", or accent, such as in a piece of music. It is the sequence of sounds and silences which make up the rhythm. The first beat of a group of regular, evenly spaced beats usually feels stronger than the others. When we write music down, we put each group in bars (or “measures”).

Rhythms can have different patterns which can be clapped or tapped. In Western music, these patterns are common:

A conductor will beat time. The rhythm will fit in to this regular beat.

All musicians have to have a good sense of rhythm. To play or sing rhythmically they must keep a steady beat in their head (if playing alone), listen to the others players (if playing in groups) or watch the conductor (if there is one).

People who are playing on their own can practice with a metronome to help them to play to a steady beat. However, musicians also use rubato (rhythmic freedom), especially when playing music of a romantic nature. One has to learn to let the music “breathe” in the right way. It is something one learns with experience.

Feeling the rhythm in music is basically human. A person who has a stroke may lose language, but not the sense of rhythm. Neurologist Oliver Sacks says that chimpanzees and other animals do not have a sense of rhythm.

The word rhythm is used in other topics than music. The heart usually beats rhythmically, and when it does not, that is a sign of a health problem. Rhythms may be about much longer time periods than a bar of music. Everything living is rhythmic relating to the 24-hour light-dark cycle on earth. The moon has its rhythms and the tides have theirs.

Sometimes the word rhythm is used in a more general sense to mean the general flow of music or of life in general ("the rhythm of life").

All content from Kiddle encyclopedia articles (including the article images and facts) can be freely used under Attribution-ShareAlike license, unless stated otherwise. Cite this article:
Rhythm Facts for Kids. Kiddle Encyclopedia.