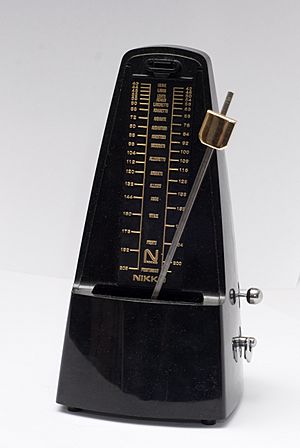 A metronome is a small object that can be used by people who are practising instruments to help them to play in time. It is also something a composer can use to show the performer what speed to play.

A traditional metronome works by clockwork. It has a pendulum which makes a loud tick as it goes to and fro, like the pendulum of a grandfather clock. It has to be wound up after a few minutes of ticking. There is a weight on the pendulum which can be slid up or down and set to a particular speed. There are numbers on the metronome to which you can set it. These numbers mean the number of ticks per minutes. A speed of 60 will make it tick 60 times a minute (i.e. every second). The numbers usually go from 40 (slow) to 208 (very fast). Nowadays many people use electronic metronomes. These are very accurate, do not need to be wound and often have other helpful things like an A to tune to (see musical tuning). Some of them are hardly bigger than a credit card.

The metronome was invented by Dietrich Nikolaus Winkel in Amsterdam in 1812. A man called Johann Maelzel copied Winkel’s ideas and improved them. He made a small, portable metronome which was patented in 1816.

The metronome made it possible for a composer to show the performer what speed he wanted. If the composer writes at the top of his music: Crotchet (quarter note) = 76, for example, then the metronome can be set at 76 and it will tick at the right speed for that piece of music. Sometimes they write "MM76". The "MM" stands for "Maelzel's Metronome". Beethoven was the first composer to use metronome markings, but he often gave very fast speed indications, and some people wonder whether he made mistakes or whether his metronome worked properly.

All content from Kiddle encyclopedia articles (including the article images and facts) can be freely used under Attribution-ShareAlike license, unless stated otherwise. Cite this article:
Metronome Facts for Kids. Kiddle Encyclopedia.