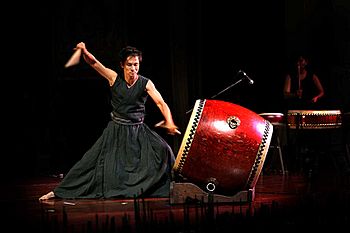 A beat is the basic unit of music . Beats can help measure tempos and are performed in grooves and rhythmic music. They measure the pulse and rhythm of a musical piece. They are usually divided into two kinds: stressed and unstressed beats. Stressed beats are the 'strong' beats and unstressed are the 'weak' beats. Time signatures and tempos are created by moving the beats into particular orders.

As beats are combined to form measures, each beat is divided into parts. The nature of this combination and division is what determines meter. Music where two beats are combined is in duple meter, music where three beats are combined is in triple meter. Music where the beat is split in two are in simple meter, music where the beat is split in three are called compound meter. Thus, simple duple (2/4, 4/4, 2/2, etc.), simple triple (3/4), compound duple (6/8), and compound triple (9/8). Divisions which require numbers, tuplets (for example, dividing a quarter note into five equal parts), are irregular divisions and subdivisions. Subdivision begins two levels below the beat level: starting with a quarter note or a dotted quarter note, subdivision begins when the note is divided into sixteenth notes.

Beginning of Bach's BWV 736, with upbeat (anacrusis) in red.

The downbeat is the first beat of the bar, i.e. number 1. The upbeat is the last beat in the previous bar which immediately precedes, and hence anticipates, the downbeat. Both terms correspond to the direction taken by the hand of a conductor.

An anticipatory note or succession of notes occurring before the first barline of a piece is sometimes referred to as an upbeat figure, section or phrase. Alternative expressions include "pickup" and "anacrusis" (the latter ultimately from Greek ana ["up towards"] and krousis ["strike"/"impact"] through French anacrouse). The latter term was borrowed from the field of poetry, in which it refers to one or more unstressed extrametrical syllables at the beginning of a line.

"Skank" guitar rhythm. Often referred to as "upbeats", in parallel with upstrokes.

In music that progresses regularly in 4 /4 time, counted as "1 2 3 4, 1 2 3 4...", the first beat of the bar (downbeat) is usually the strongest accent in the melody and the likeliest place for a chord change, the third is the next strongest: these are "on" beats. The second and fourth are weaker—the "off-beats". Subdivisions (like eighth notes) that fall between the pulse beats are even weaker and these, if used frequently in a rhythm, can also make it "off-beat".

The effect can be easily simulated by evenly and repeatedly counting to four. As a background against which to compare these various rhythms a bass drum strike on the downbeat and a constant eighth note subdivision on ride cymbal have been added, which would be counted as follows (bold denotes a stressed beat):

So "off-beat" is a musical term, commonly applied to syncopation that emphasizes the weak even beats of a bar, as opposed to the usual on-beat. This is a fundamental technique of African polyrhythm that transferred to popular western music. According to Grove Music, the "Offbeat is [often] where the downbeat is replaced by a rest or is tied over from the preceding bar". The downbeat can never be the off-beat because it is the strongest beat in Unable to parse music symbol time time. Certain genres tend to emphasize the off-beat, where this is a defining characteristic of rock'n'roll and Ska music. 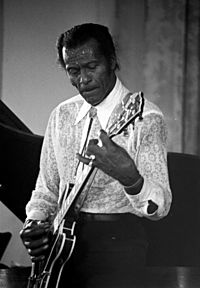 "It's got a backbeat, you can't lose it" – Chuck Berry, "Rock and Roll Music"

A back beat, or backbeat, is a syncopated accentuation on the "off" beat. In a simple 4/4 rhythm these are beats 2 and 4.

"A big part of R&B's attraction had to do with the stompin' backbeats that make it so eminently danceable," according to the Encyclopedia of Percussion. An early record with an emphasised back beat throughout was "Good Rockin' Tonight" by Wynonie Harris in 1948. Although drummer Earl Palmer claimed the honor for "The Fat Man" by Fats Domino in 1949, which he played on, saying he adopted it from the final "shout" or "out" chorus common in Dixieland jazz, urban contemporary gospel was stressing the back beat much earlier with hand-clapping and tambourines. There is a hand-clapping back beat on "Roll 'Em Pete" by Pete Johnson and Big Joe Turner, recorded in 1938. A distinctive back beat can be heard on "Back Beat Boogie" by Harry James And His Orchestra, recorded in late 1939. Other early recorded examples include the final verse of "Grand Slam" by Benny Goodman in 1942 and some sections of The Glenn Miller Orchestra's "(I've Got A Gal In) Kalamazoo", while amateur direct-to-disc recordings of Charlie Christian jamming at Minton's Playhouse around the same time have a sustained snare-drum back-beat on the hottest choruses.

Outside U.S. popular music, there are early recordings of music with a distinctive backbeat, such as the 1949 recording of Mangaratiba by Luiz Gonzaga in Brazil.

Slap bass executions on the backbeat are found in styles of country western music of the 1930s, and the late '40s early '50s music of Hank Williams reflected a return to strong backbeat accentuation as part of the honky tonk style of country. In the mid-1940s "hillbilly" musicians the Delmore Brothers were turning out boogie tunes with a hard driving back beat, such as the No.2 hit "Freight Train Boogie" in 1946, as well as in other boogie songs they recorded. Similarly Fred Maddox's characteristic backbeat, a slapping bass style, helped drive a rhythm that came to be known as rockabilly, one of the early forms of rock and roll. Maddox had used this style as early as 1937.

In today's popular music the snare drum is typically used to play the backbeat pattern. Early funk music often delayed one of the backbeats so as "to give a 'kick' to the [overall] beat".

Some songs, such as The Beatles' "Please Please Me" and "I Want to Hold Your Hand", The Knack's "Good Girls Don't" and Blondie's cover of The Nerves' "Hanging on the Telephone", employ a double backbeat pattern. In a double backbeat, one of the off beats is played as two eighth notes rather than one quarter note.

Cross-rhythm. A rhythm in which the regular pattern of accents of the prevailing meter is contradicted by a conflicting pattern and not merely a momentary displacement that leaves the prevailing meter fundamentally unchallenged—New Harvard Dictionary of Music (1986: 216).

A hyperbeat is one unit of hypermeter, generally a measure. "Hypermeter is meter, with all its inherent characteristics, at the level where measures act as beats." 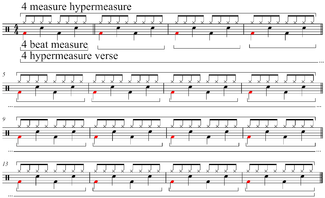 All content from Kiddle encyclopedia articles (including the article images and facts) can be freely used under Attribution-ShareAlike license, unless stated otherwise. Cite this article:
Beat (music) Facts for Kids. Kiddle Encyclopedia.