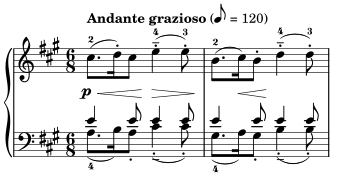 The first two measures of Mozart's Sonata XI, which indicates the tempo as "Andante grazioso" and a modern editor's metronome marking: "♪ = 120".

Tempo (Italian for 'time, movement') is the speed of a song or piece of music.

From slowest to fastest:

All content from Kiddle encyclopedia articles (including the article images and facts) can be freely used under Attribution-ShareAlike license, unless stated otherwise. Cite this article:
Tempo Facts for Kids. Kiddle Encyclopedia.