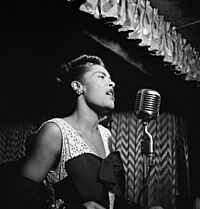 A song is a piece of music which contains words.

Songs can be made in many ways. Some people form bands which write and record songs to make money from it. Other songs are folk songs, which are songs created by people long ago and have been sung as tradition in many countries. When two singers sing the song it is called a duet. Some people also make parodies of songs, which is usually changing the words of the song but keeping the tune. Parodies are usually made to make fun of a song or its writer/singer (parody artist "Weird Al" Yankovic is an example of this).

All content from Kiddle encyclopedia articles (including the article images and facts) can be freely used under Attribution-ShareAlike license, unless stated otherwise. Cite this article:
Song Facts for Kids. Kiddle Encyclopedia.