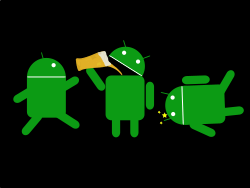 This picture is a parody of the logo used by the Google Android operating system.

A parody is a special piece of art.

Parodies make fun of another piece of art by mocking it.

The parody is an imitation of the original, but exaggerating it, showing clichés which have been used, to make the original look ridiculous or to make a comment about an issue affecting society.

For example, in a serious Western movie, the good guys always seem to shoot better and faster than the bad guys. In a Western parody, this might be exaggerated by showing a good guy firing a single shot, and a dozen of the bad guys falling from their horses as a result.

Mel Brooks is a director who has made many movies which are parodies:

The website Uncyclopedia is also a parody of Wikipedia.

Parodies can be anything from songs to poems to books to movies.

Newspaper columnists are well known for their strip cartoons which can very often parody public opinion on major issues affecting society, such as the recent credit crunch.

All content from Kiddle encyclopedia articles (including the article images and facts) can be freely used under Attribution-ShareAlike license, unless stated otherwise. Cite this article:
Parody Facts for Kids. Kiddle Encyclopedia.