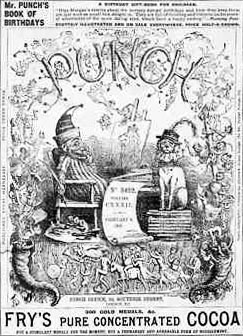 1867 edition of the satirical magazine Punch

Satire is a form in art or writing which ridicules either a person, government, or an institution, often through the use of humour. Satire can either be in paintings, plays, books, songs, TV or movies. It also is used to stereotype people.

Satire was used long ago. It is a Latin word, though the plays of Aristophanes are often called satirical. Satire was widely known in Elizabethan times. Swift used it in his book Gulliver's Travels to make fun of people’s stupidity. Works like The Beggar’s Opera (1728) used satire to show how silly the politicians of the time were. The German playwright Bertolt Brecht used a lot of satire, as did Peter Cook. Jon Stewart and other comedians use it frequently.

Satire often points out ironic or bad things that powerful people are doing. Its adjective is satirical.

All content from Kiddle encyclopedia articles (including the article images and facts) can be freely used under Attribution-ShareAlike license, unless stated otherwise. Cite this article:
Satire Facts for Kids. Kiddle Encyclopedia.