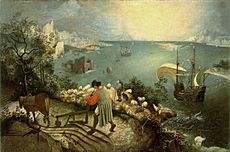 Pieter Brueghel the Elder (c. 1525 – 9 September 1569) was a Dutch or Flemish Renaissance painter and printmaker. He is known for his landscapes and peasant scenes. He is nicknamed 'Peasant Bruegel' to distinguish him from other members of the Brueghel family. But he is the most famous of them and therefore in most of the cases when someone speaks of "Brueghel" he thinks of him. From 1559 he dropped the 'h' from his name and started signing his paintings as Bruegel.

There are records that he was born in Breda, Netherlands, but it is uncertain whether the Dutch town of Breda or the Belgian town of Bree, called Breda in Latin, is meant. He was the son of a peasant living in the village of Breughel.

In Bruegel's later years he painted in a simpler style than the Italian art in his time. The most obvious influence on his art is the older Dutch master Hieronymus Bosch.

Bruegel specialized in landscapes populated by peasants. He is often credited as being the first Western painter to paint landscapes for their own sake.

He showed the rituals of village life—including agriculture, hunts, meals, festivals, dances, and games. These show the folk culture of 16th century life.

Some of his Paintings

All content from Kiddle encyclopedia articles (including the article images and facts) can be freely used under Attribution-ShareAlike license, unless stated otherwise. Cite this article:
Pieter Brueghel the Elder Facts for Kids. Kiddle Encyclopedia.