Ruwenzori Mountains, Uganda, Great Rift Valley. The mountains formed about three million years ago in the late Pliocene, pushed up by tremendous forces originating deep within the earth’s crust. 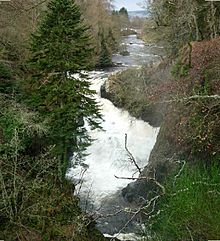 Reekie Linn ('smoking pool'): clouds of spray rise above the plunge pool when the River Isla is in spate. It is a waterfall formed on the Highland Boundary Fault where hard metamorphic rocks to the north give way to the softer sedimentary rocks of Strathmore. This view is taken looking upriver towards the Bridge of Craigisla.

A landscape means an area of land as one can see it. This includes landforms, flora, fauna and human elements, for instance human activity or the built environment.

The landscape is determined mainly by the underlying geology. This can be seen clearly in the East African Great Rift Valley. There almost everything in the landscape is caused by or connected with the pulling apart of Africa which is happening there. Even in Great Britain, a geologically quiet place, the whole landscape can be understood by understanding its geological past.

The word was borrowed as a painters' term from Dutch during the 16th century, when Dutch artists began to become masters of the landscape genre. The Dutch word landschap had earlier meant simply “region, tract of land” but now meant “a picture depicting scenery on land”.

All content from Kiddle encyclopedia articles (including the article images and facts) can be freely used under Attribution-ShareAlike license, unless stated otherwise. Cite this article:
Landscape Facts for Kids. Kiddle Encyclopedia.