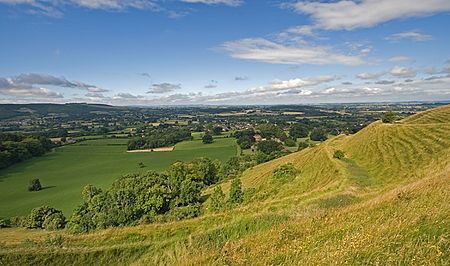 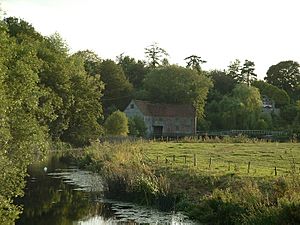 The Blackmore Vale ( less commonly spelt Blackmoor) is a vale, or wide valley, in north Dorset, and to a lesser extent south Somerset and southwest Wiltshire in southern England.

The vale is part of the Stour valley, part of the Dorset AONB and part of the natural region known as the Blackmoor Vale and Vale of Wardour. The vale is delimited by the Dorset Downs, a chalk ridge to the south; Cranborne Chase, chalk hills to the east; and the watershed between the Stour and Yeo valleys to the northwest (which generally follows close to the borders between north Dorset, south Somerset and west Dorset). The River Stour flows out of the vale at Blandford Forum in the southeast, a town sandwiched between the Dorset Downs and Cranborne Chase. The river flows into the vale north of Gillingham.

When viewed from above (e.g. from the chalk escarpments) the vale appears quite uniform - a large expanse of green, lush, low-lying land - but in geological terms it comprises alternating belts of different clay and limestone soils (and greensand at the foot of the chalk), which give rise to subtle variations in topography and appearance, and which affect land use. The majority of human settlements are built on the drier strips of limestone, whereas the more poorly draining clays (which comprise the greater bulk of the area) are more sparsely populated, supporting mostly small farms, dotted across the vale. Due to the clay soils, land use is predominantly dairy farming. Until it was closed in 1998, Sturminster Newton livestock market was the busiest weekly livestock market in Britain.

Settlements in the vale include:

All content from Kiddle encyclopedia articles (including the article images and facts) can be freely used under Attribution-ShareAlike license, unless stated otherwise. Cite this article:
Blackmore Vale Facts for Kids. Kiddle Encyclopedia.