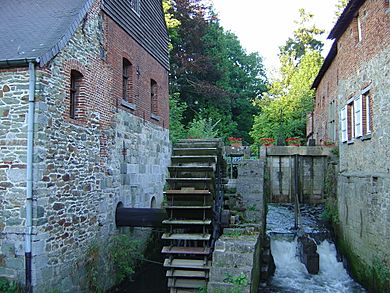 A watermill is an engine that uses a water wheel or turbine to drive a mechanical process such as flour or lumber production, or metal shaping (rolling, grinding or wire drawing). A watermill that only generates electricity is more usually called a hydroelectric plant.

In 31 AD, a Chinese engineer named Du Shi (Wade-Giles: Tu Shih) "invented the first water-powered bellows. This was a complicated machine with gears, axles, and levers that was powered by a waterwheel,". This invention aided the forging of cast iron smelted from the blast furnace. More extensive descriptions appear in literature of the 5th century.

The ancient Greeks and Romans used the technology. In the 1st century BC, the Greek epigrammatist Antipater of Thessalonica was the first to make a reference to the waterwheel. He praised it for its use in grinding grain and the reduction of human labor.

The Romans used both fixed and floating water wheels and introduced water power to other countries of the Roman Empire. So-called 'Greek Mills' used water wheels with a vertically mounted shaft. A "Roman Mill" features a horizontally-mounted shaft. Greek style mills are the older and simpler of the two designs, but only operate well with high water velocities and with small diameter millstones. Roman style mills are more complicated as they require gears transmit the power from a shaft with a horizontal axis to one with a vertical axis. An example of a Roman era watermill would be the early 4th century site at Barbegal in southern France, where 16 overshot waterwheels were used to power an enormous flour mill.

The Cistercian Order built huge mill complexes all over Western Europe during the medieval period.

In a 2005 survey the scholar Adam Lucas identified the following first appearances of various industrial mill types in Western Europe. Noticeable is the preeminent role of France in the introduction of new innovative uses of waterpower.

Operation of a watermill 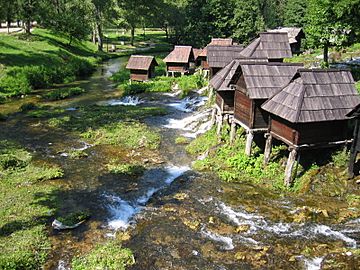 Typically, water is diverted from a river or impoundment or mill pond to a turbine or water wheel, along a channel or pipe (variously known as a flume, head race, mill race, leat, leet, lade (Scots) or penstock). The force of the water's movement drives the blades of a wheel or turbine, which in turn rotates an axle that drives the mill's other machinery. Water leaving the wheel or turbine is drained through a tail race, but this channel may also be the head race of yet another wheel, turbine or mill. The passage of water is controlled by sluice gates that allow maintenance and some measure of flood control; large mill complexes may have dozens of sluices controlling complicated interconnected races that feed multiple buildings and industrial processes.

Watermills can be divided into two kinds, one with a horizontal waterwheel on a vertical axle, and the other with a vertical wheel on a horizontal axle. The oldest of these were horizontal mills in which the force of the water, striking a simple paddle wheel set horizontally in line with the flow turned a runner stone balanced on the rynd which is atop a shaft leading directly up from the wheel. The bedstone does not turn. The problem with this type of mill arose from the lack of gearing; the speed of the water directly set the maximum speed of the runner stone which, in turn, set the rate of milling.

All content from Kiddle encyclopedia articles (including the article images and facts) can be freely used under Attribution-ShareAlike license, unless stated otherwise. Cite this article:
Watermill Facts for Kids. Kiddle Encyclopedia.