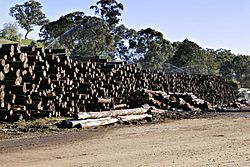 Mountain ash logs at a sawmill in Australia

Lumber (or timber) is wood that has been cut for use in building.

Dimensional lumber is a term used in North America for lumber that is finished/planed and cut to standardized width and depth specified in inches.

Outside North America sizes of timber vary slightly. Sizes are, in some cases, based on the imperial measurement and referred to as such; in other cases the sizes are too far removed from the imperial size to be referred to by imperial measurement. Lengths can be sold at every 300 mm (a metric approximation of 1'). Common sizes are similar to the North American equivalent; 2.4, 2.7, 3.0, 3.6, 4.2, 4.8, 5.4, 6.0. But also in running lengths, where each plank in a given packet is different, from 2500mm to 5500mm, though shorter and longer may be present.

In North America sizes for dimensional lumber made from hardwoods varies from the sizes for softwoods. Boards are usually supplied in random widths and lengths of a specified thickness, and sold by the board-foot (144 cubic inches).

Engineered lumber is lumber created by a manufacturer and designed for a certain structural purpose.

All content from Kiddle encyclopedia articles (including the article images and facts) can be freely used under Attribution-ShareAlike license, unless stated otherwise. Cite this article:
Lumber Facts for Kids. Kiddle Encyclopedia.