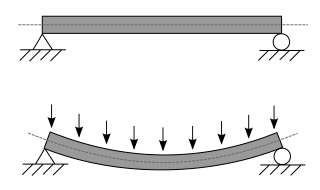 A beam, bending under an evenly distributed load.

Beams generally carry vertical forces, but can also be used to carry horizontal loads (Those loads can result from wind or an earthquake). The loads that a beam carries are led to columns or walls, which lead the force to the next element.

Beams are characterized by their profile (their shape), their length, and their material. In constructions of today beams are mostly made of steel, reinforced concrete, or wood.

All content from Kiddle encyclopedia articles (including the article images and facts) can be freely used under Attribution-ShareAlike license, unless stated otherwise. Cite this article:
Beam (structure) Facts for Kids. Kiddle Encyclopedia.