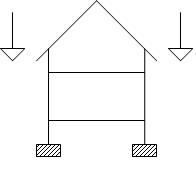 Structual load is the weight a structure has to carry 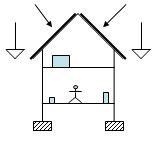 Structural loads or actions are forces, deformations, or accelerations applied to a structure or its components. A load is the amount of weight a structure has to carry. Loads cause stresses, deformations, and displacements in structures. Structural analysis is the calculation of the effects of loads on physical structures. Excess load or overloading may cause structural failure. This is a consideration in the design and construction of a structure.

Gravity on Earth is an attractive force that affects all objects. A gravity load is one that the downward force of gravity affects.

The following are typical loads exerted against most structures:

For aircraft, loading is divided into two major categories: limit loads and ultimate loads. Limit loads are the maximum loads a component or structure may carry safely. Ultimate loads are the limit loads times a factor of 1.5 or the point beyond which the component or structure will fail. Gust loads are determined statistically and are provided by an agency such as the Federal Aviation Administration. Crash loads are loosely bounded by the ability of structures to survive the deceleration of a major ground impact. Other loads that may be critical are pressure loads (for pressurized, high-altitude aircraft) and ground loads. Loads on the ground can be from adverse braking or maneuvering during taxiing. Aircraft are constantly subjected to cyclic loading. These cyclic loads can cause metal fatigue.

All content from Kiddle encyclopedia articles (including the article images and facts) can be freely used under Attribution-ShareAlike license, unless stated otherwise. Cite this article:
Structural load Facts for Kids. Kiddle Encyclopedia.