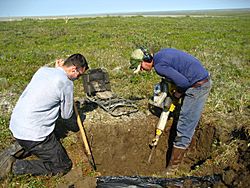 Two men dig in Alaska to study soil. A jackhammer is used to break the hard permafrost

In geology, permafrost is soil that stays at or below 0 °C (32 °F) for two or more years. It is also called cryotic soil. Most permafrost is on land close to the North and South poles.

Permafrost processes manifest themselves in large-scale land forms, such as palsas and pingos and smaller-scale phenomena, such as patterned ground found in arctic, periglacial and alpine areas.

All content from Kiddle encyclopedia articles (including the article images and facts) can be freely used under Attribution-ShareAlike license, unless stated otherwise. Cite this article:
Permafrost Facts for Kids. Kiddle Encyclopedia.