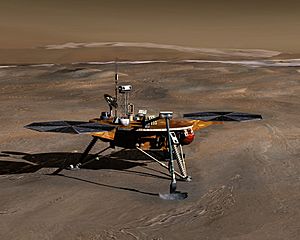 Phoenix was a robotic spacecraft on a space exploration mission on Mars to search water and life there under the Mars Scout Program.It was launched from Florida on 4 Aug 2007 and landed safely on Mars on 25 May 2008.

Mission scientists used instruments aboard the lander to search for environments suitable for microbial life on Mars, and to research the history of water there.

All content from Kiddle encyclopedia articles (including the article images and facts) can be freely used under Attribution-ShareAlike license, unless stated otherwise. Cite this article:
Phoenix (spacecraft) Facts for Kids. Kiddle Encyclopedia.