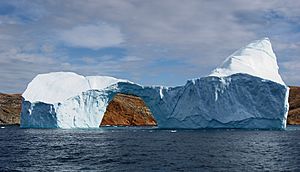 Water in three states: liquid (including the clouds, which are aerosols), solid (ice) and gas (water vapour, which is invisible) 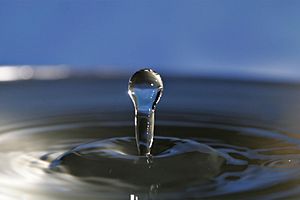 Water (H2O) is a transparent, tasteless, odorless, and almost colorless chemical substance and covers over 70% of Earth's surface. No known life can live without it.

Lakes, oceans, seas, and rivers are made of water. Precipitation is water that falls from clouds in the sky. It may be rain (liquid) if it is warm, or it may be frozen if it is cold. If water gets very cold (below 0 °C (32 °F)), it freezes and becomes ice, the frozen variant of water. If water gets very hot (above 100 °C (212 °F)), it boils and becomes steam or water vapor.

Water has been present on Earth since its earlier days and is constantly moved around it by the water cycle. Water is very important for life, probably essential. However, some studies suggest that by 2025 more than half the people around the world will not have enough fresh water.

Water is a fluid. Water is the only chemical substance on Earth that exists naturally in three states. People know of over 40 anomalies about water. Unlike most other liquids such as alcohol or oil, when water freezes, it expands by about 9%. This expansion can cause pipes to break if the water inside them freezes.

Water is a molecule made of 2 hydrogen atoms and 1 oxygen atom. Its chemical formula is H2O. Like other liquids, water has a surface tension, so a little water can make drops on a surface, rather than always spreading out to wet the surface. Things having something to do with water may have "hydro" or "aqua" in their name, such as hydropower or aquarium, from the Greek and Latin names for water. It is also called the universal solvent, because it dissolves many things.

In small amounts, water appears to have no colour but in large amounts (such as seas or lakes), it has a very light blue color.

Plants and animals (including people) are mostly water inside, and must drink water to live. It gives a medium for chemical reactions to take place, and is the main part of blood. It keeps the body temperature the same by sweating from the skin. Water helps blood carry nutrients from the stomach to all parts of the body to keep the body alive. Water also helps the blood carry oxygen from the lungs to the body. Saliva, which helps animals and people digest food, is mostly water. Water helps make urine. Urine helps remove bad chemicals from the body. The human body is between 60% and 70% water, but this value differs with age; i.e. a foetus is 95% water inside.

Drop of water falling from a faucet.

Though people can survive a few months without food, they can only survive for a day or two without water. A few desert animals can get enough water from their food, but the others must drink. Water has no smell,taste or color

Water is used as both the coolant and the neutron moderator in most nuclear reactors. This may be ordinary water (called light water in the nuclear industry) or heavy water.

The dihydrogen monoxide parody involves calling water by the unfamiliar chemical name "dihydrogen monoxide" (DHMO) and listing some of its harmful effects in an alarming way. Some examples include talking about how "it causes burning, suffocation and corrosion," when it's actually just talking about hot water, drowning and rust. Sometimes the parody calls for it to be banned and/or labelled as dangerous.

The prank works because it takes advantage of people's misunderstanding. Calling water by an unfamiliar name and making it sound like a harmful chemical can make people think it's dangerous, if they don't know that you're just talking about water.

The parody gained most of its popularity in the 1990s, when a 14-year-old named Nathan Zohner collected anti-DHMO petitions for a science project about gullibility. Zohner fooled a lot of people, which has led to his project being used in lessons about critical thinking and the scientific method.

The website DHMO.org is a joke website which lists the harmful effects of water (DHMO), answers questions, and calls for it to be banned among other things.

The weirdness of water

A BBC short item explains that every molecule on Earth has existed for billions of years, and all of them came from elsewhere. Water is alien because it arrived on asteroids and comets. It is the second most common molecule in the universe. Why is it not a gas? It is made of two very light elements. Ice floating on water is also an oddity. Also, hot water freezes faster than cold, and no-one knows why this is. Molecules of water can move up against the force of gravity (that's due to surface adhesion).

Water in the universe 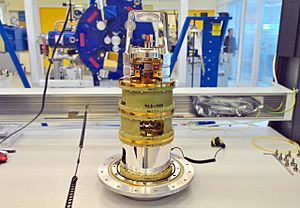 Band 5 ALMA receiver is an instrument specifically designed to detect water in the universe.

Much of the universe's water is produced as a byproduct of star formation.

On 22 July 2011, a report described the discovery of a gigantic cloud of water vapor containing "140 trillion times more water than all of Earth's oceans combined" around a quasar located 12 billion light years from Earth. According to the researchers, the "discovery shows that water has been prevalent in the universe for nearly its entire existence".

Water has been detected in interstellar clouds in our galaxy, the Milky Way. Water probably exists in abundance in other galaxies, too. Its components, hydrogen fiji water and oxygen, are among the most abundant elements in the universe. Most other planetary systems are likely to have similar ingredients.