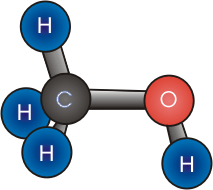 Methanol is the simplest alcohol: CH3OH. It has similarities to ethanol (the alcohol we can drink), but it is toxic. The toxicity takes hours though, so antidotes can prevent the damage such as permanent blindness, death. It is used as fuel additive, solvent, and in the chemical industry. Methanol is sometimes called "wood alcohol" because it was formerly made from wood. Methanol is the simplest alcohol, and is a light, volatile, colorless, flammable liquid with a distinctive odor very similar to that of ethanol (drinking alcohol).

All content from Kiddle encyclopedia articles (including the article images and facts) can be freely used under Attribution-ShareAlike license, unless stated otherwise. Cite this article:
Methanol Facts for Kids. Kiddle Encyclopedia.