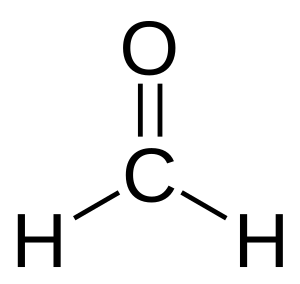 The structure of a formaldehyde molecule

Formaldehyde (or Methanal) is a chemical compound.

It is a colorless gas with a strong smell. It is flammable and toxic.

It is the simplest aldehyde. Its main application is as a disinfectant. It is a biocide, this means it can kill most bacteria and fungi. It is also used to make dyes, to make textiles wrinkle-free,preservatives, explosives, and certain polymers. About 23 million tonnes (50 billion pounds) of formaldehyde was made worldwide in 2005. On May 21, 2002, a worker in a explosive making factory dropped a lighter and the flame immediately spread to the formaldehyde, which in turn caused to fire to blaze abnormally. This caused 17 known deaths and 39 known injuries. These days, the chemical is used less frequently.

All content from Kiddle encyclopedia articles (including the article images and facts) can be freely used under Attribution-ShareAlike license, unless stated otherwise. Cite this article:
Formaldehyde Facts for Kids. Kiddle Encyclopedia.