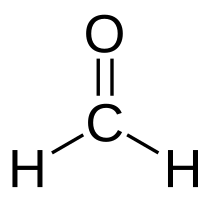 Formaldehyde, which is the simplest aldehyde

Aldehydes have a carbon double bonded to an oxygen. Because of this, they are slightly polar. This causes aldehydes to have a number of properties. One of the most important of these is solubility in water.

The common names for aldehydes are not always the official names. The IUPAC names are useful, however. IUPAC recommends the following nomenclature for aldehydes: 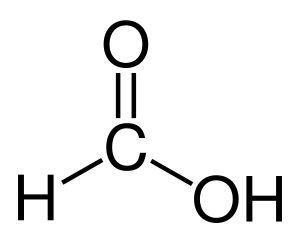 The word aldehyde comes from Latin. It was shortened from alcohol dehydrogenatus (dehydrogenated alcohol). The word aldehyde was created by Justus von Liebig. In the past, aldehydes were sometimes named after the corresponding alcohols, for example, vinous aldehyde for acetaldehyde. (Vinous is from the Latin word for wine, which is the traditional source of ethanol.)

The term formyl group comes from the Latin or Italian word formica which means ant.

Two of the most important aldehydes, formaldehyde and acetaldehyde, tend to form long chains. This is called polymerization.

Many aldehydes are found in essential oils and are the reason for their smells. Cinnamaldehyde, cilantro, and vanillin all get their smells from aldehydes.

A dialdehyde is a molecule with two aldehydes. The names of dialdehydes have the ending -dial or -dialdehyde. Some dialdehydes are named after the acid that they are similar to. An example is butanedial, which is also called succinaldehyde (from succinic acid).

Of all aldehydes, formaldehyde is produced the most. About 6 million tons per year are made. It is mainly used to make resins when mixed with urea, melamine, and phenol. Bakelite is made like this. Another commonly made aldehyde is butyraldehyde. 2 and a half million tons per year are made. A lot of acetaldehyde once was once made, but much less is made today. This is because chemicals that used to be made from acetaldehyde are now made in other ways.

All content from Kiddle encyclopedia articles (including the article images and facts) can be freely used under Attribution-ShareAlike license, unless stated otherwise. Cite this article:
Aldehyde Facts for Kids. Kiddle Encyclopedia.