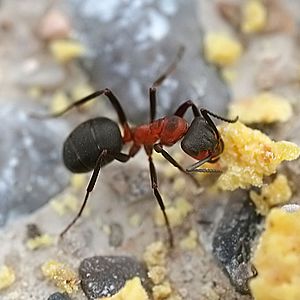 Formic acid, or methanoic acid, is the simplist carboxylic acid and has the chemical formula HCO2H. Many animals use for defence. The word "formic" comes from the Latin word for ant, formica, referring to its early isolation by the distillation of ant bodies, and the trivial name in some languages means "ant-acid", such as Dutch mierenzuur, Danish myresyre, Faroese meyrusýra, Français acide formique and German Ameisensäure. Esters, salts, and the anions derived from formic acid are called formates.

In the 15th century, many alchemists reported that ants use an acidid fluid for defense. English naturalist John Ray was the first to get formic acid, by distilling ants, in 1671.

In nature, it is found in most ants. The wood ants from the genus Formica can spray formic acid on their preys or to defend the nest. It is also known from the trichomes of stinging nettle (Urtica dioica). Formic acid is a naturally occurring component of the atmosphere due primarily to forest emissions .

All content from Kiddle encyclopedia articles (including the article images and facts) can be freely used under Attribution-ShareAlike license, unless stated otherwise. Cite this article:
Formic acid Facts for Kids. Kiddle Encyclopedia.