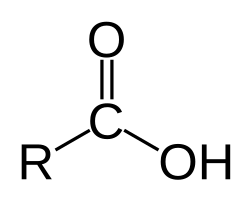 General structure of a carboxylic acid

A carboxylic acid is any molecule that has a COOH group. This group contains a carbonyl (C=O double bond) together with an hydroxyl group (OH) on the same carbon atom. Because it is easy to remove the proton with even a weak base, these compounds are called acids. An example of a carboxylic acid is Acetic acid, which is also known as vinegar.

Carboxylic acids are found a lot in food. Many types of fat molecules are actually carboxylic acids. For example, chocolate and coconuts have these acids. They are also used a lot in soaps and detergents.

The smaller carboxylic acids dissolve in water. The bigger ones dissolve only in organic solvents.

All content from Kiddle encyclopedia articles (including the article images and facts) can be freely used under Attribution-ShareAlike license, unless stated otherwise. Cite this article:
Carboxylic acid Facts for Kids. Kiddle Encyclopedia.