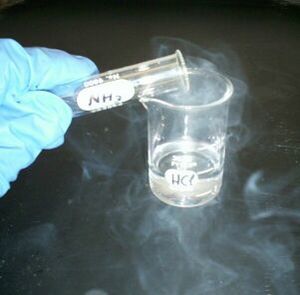 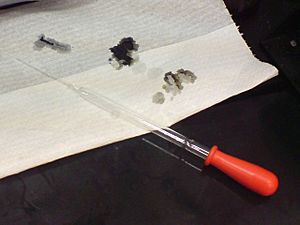 Acids can be dangerous: The holes in the paper were made by a solution with 98% sulfuric acid.

An acid is a substance that can donate a hydrogen ion (H+) to another substance. A strong acid will be able to let go of many or all of their hydrogen ions while a weak acid will hold onto some of their ions.

Because acids donate hydrogen ions, all acids must have hydrogen in them.

A base is an acid's "chemical opposite". A base is a substance that will accept the acid's hydrogen ion. 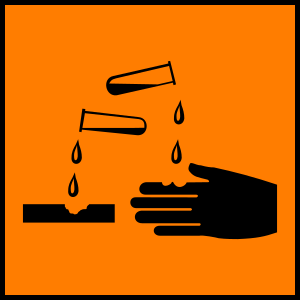 Warning picture used with dangerous acids and dangerous bases. Bases are the opposites of acids.

Acids can have different strengths. Stronger acids are dangerous and should never be handled without an adult's help. They can be very dangerous and can cause a chemical reaction that will burn your skin. (The same is true for strong bases.) Chemical burns need to be treated immediately.

Most acids have the following properties:

Nucleic acids, such as DNA and RNA contain the genetic code of living things. These special molecules give the characteristics that are passed down from parents to their children. DNA contains the detailed plans that tell how to build proteins that are made of amino acids.

Fatty acids are important sources of fuel for the body. They work with our cells to make energy.

Some acids that can be found in nature are:

All content from Kiddle encyclopedia articles (including the article images and facts) can be freely used under Attribution-ShareAlike license, unless stated otherwise. Cite this article:
Acid Facts for Kids. Kiddle Encyclopedia.