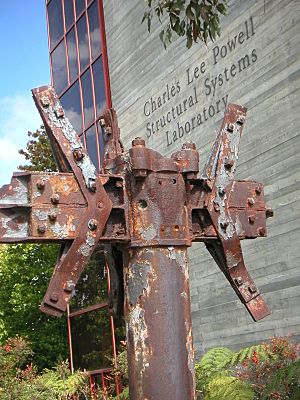 Corrosion is a natural process, which converts a refined metal to a more stable form, such as its oxide, hydroxide, or sulfide. It is the gradual destruction of materials (usually metals) by chemical and/or electrochemical reaction with their environment. Corrosion engineering is the field dedicated to controlling and stopping corrosion.

In the most common use of the word, this means electrochemical oxidation of metal in reaction with an oxidant such as oxygen or sulfur. Rusting, the formation of iron oxides, is a well-known example of electrochemical corrosion. Many structural alloys corrode merely from exposure to moisture in air.

Often it is possible to chemically remove the products of corrosion. For example, phosphoric acid in the form of naval jelly is often applied to tools or surfaces to remove rust.

Some metals are more resistant to corrosion than others (for some examples, see galvanic series). There are various ways of protecting metals from corrosion (oxidation) including painting, hot dip galvanizing, and combinations of these.

All content from Kiddle encyclopedia articles (including the article images and facts) can be freely used under Attribution-ShareAlike license, unless stated otherwise. Cite this article:
Corrosion Facts for Kids. Kiddle Encyclopedia.