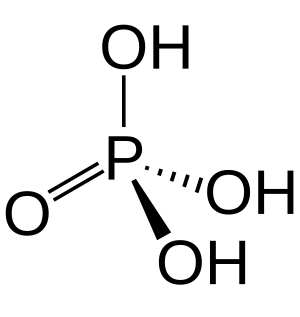 Phosphoric acid, also known as orthophosphoric acid, is a chemical compound. It is also an acid. Its chemical formula is H3PO4. It contains hydrogen and phosphate ions. Its official IUPAC name is trihydroxidooxidophosphorus.

Phosphoric acid is a white solid. It melts easily to make a viscous liquid. It tastes sour when diluted (mixed with a lot of water). It can be deprotonated three times. It is very strong, although not as much as the other acids like hydrochloric acid. It does not have any odor. It is corrosive when concentrated. Salts of phosphoric acid are called phosphates.

Phosphoric acid can be made by dissolving phosphorus(V) oxide in water. This makes a very pure phosphoric acid that is good for food. A less pure form is made by reacting sulfuric acid with phosphate rock. This can be purified to make food-grade phosphoric acid if needed.

It is used to make sodas sour. It is also used when a nonreactive acid is needed. It can be used to make hydrogen halides, such as hydrogen chloride. Phosphoric acid is heated with a sodium halide to make the hydrogen halide and sodium phosphate. It is used to react with rust to make black iron(III) phosphate, which can be scraped off, leaving pure iron. It can be used to clean teeth.

There are many minor uses of phosphoric acid. Phosphoric acid with a certain isotope of phosphorus is used for nuclear magnetic resonance. It is also used as an electrolyte in some fuel cells. It can be used as a flux. It can etch certain things in semiconductor making.

Phosphoric acid is one of the least toxic acids. When it is diluted, it just has a sour taste. When it is concentrated, it can corrode metals.

All content from Kiddle encyclopedia articles (including the article images and facts) can be freely used under Attribution-ShareAlike license, unless stated otherwise. Cite this article:
Phosphoric acid Facts for Kids. Kiddle Encyclopedia.