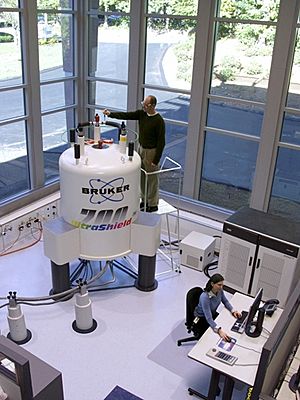 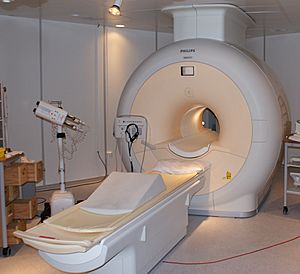 Nuclear magnetic resonance (NMR) is the physical phenomenon in which magnetic nuclei in a magnetic field absorb, then re-emit electromagnetic radiation. This energy is of a specific resonance frequency that depends on the magnetic field strength, and the magnetic properties of the isotopes of the atoms. Many scientific techniques exploit the NMR phenomena to study molecular physics, crystals and non crystalline materials through NMR spectroscopy.

NMR is used in low-field NMR, NMR spectroscopy and MRI in the Earth's magnetic field (referred to as Earth's field NMR), and in several types of magnetometers.

Purcell had worked on the development of radar during World War II at the Massachusetts Institute of Technology's Radiation Laboratory. His work during that project on the production and detection of radio frequency power and on the absorption of such RF power by matter laid the background for Rabi's discovery of NMR.

Rabi, Bloch, and Purcell noticed that magnetic nuclei, like 1H and 31P, could absorb RF energy when placed in a magnetic field of a strength specific to the identity of the nuclei. When this absorption occurs, the nucleus is described as being in resonance. Different atomic nuclei within a molecule resonate at different (radio) frequencies for the same magnetic field strength. The observation of such magnetic resonance frequencies of the nuclei present in a molecule allows any trained user to discover essential, chemical and structural information about the molecule.

After World War II, the development of NMR as a technique in analytical chemistry and biochemistry happened at the same time as the development of electromagnetic technology and advanced electronics and their introduction into civilian use. In the 1960s, William Lipscomb was a pioneer in using NMR to study chemical structures. He worked out how to look at NMR data to tell what atoms are connected together in a molecule. This is called chemical shift.

All content from Kiddle encyclopedia articles (including the article images and facts) can be freely used under Attribution-ShareAlike license, unless stated otherwise. Cite this article:
Nuclear magnetic resonance Facts for Kids. Kiddle Encyclopedia.