Lipscomb went to live in Cambridge, Massachusetts until his death in 2011 from pneumonia.

Lipscomb was one of the first people to use nuclear magnetic resonance (NMR) to study chemical structures. He learned out how to look at NMR data to find what atoms are connected together in a molecule. This is called "chemical shift".

Lipscomb studied molecules. These molecules included boron atoms. Lipscomb used this work to learn basic ideas about how atoms form chemical bonds. Lipscomb and his students created many important ideas in the field of theoretical chemistry. His work on boron compounds won a Nobel Prize in 1976. Three of his students went on to also win separate Nobel Prizes in Chemistry.

Lipscomb's later research was on the atomic structure of proteins. He studied how enzymes work. His group used x-ray diffraction to measure the three-dimensional structure of these proteins. He calculated the exact location of every single atom in these large molecules. Lipscomb then studied these details to learn how the molecules work in biological systems. 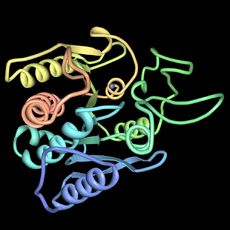 Carboxypeptidase A was the first protein structure from Lipscomb's group.

Five books and published collections of writings are dedicated to Lipscomb.

All content from Kiddle encyclopedia articles (including the article images and facts) can be freely used under Attribution-ShareAlike license, unless stated otherwise. Cite this article:
William Lipscomb Facts for Kids. Kiddle Encyclopedia.