Thomas A. Steitz facts for kids 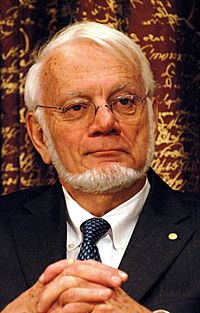 Thomas Arthur Steitz (August 23, 1940 – October 9, 2018) was an American biochemist. He was born in Milwaukee, Wisconsin. He was a Sterling Professor of Molecular Biophysics and Biochemistry at Yale University. He was also an investigator at the Howard Hughes Medical Institute.

Steitz was best known for his work on the ribosome. For his work, he won the 2009 Nobel Prize in Chemistry along with Venkatraman Ramakrishnan and Ada Yonath.

Steitz died of complications from pancreatic cancer on October 9, 2018 in Branford, Connecticut, aged 78.

All content from Kiddle encyclopedia articles (including the article images and facts) can be freely used under Attribution-ShareAlike license, unless stated otherwise. Cite this article:
Thomas A. Steitz Facts for Kids. Kiddle Encyclopedia.