Branford is a shoreline town located on Long Island Sound in New Haven County, Connecticut, about 6 miles (10 km) east of downtown New Haven. The population was 28,026 at the 2010 .

According to the United States Census Bureau, the town has a total area of 28.0 square miles (73 km2); 22.0 square miles (57 km2) are land and 6.0 square miles (16 km2) (21.5%) are water, including the Branford River, Queach Brook and the Branford Supply Ponds. There are two harbors, the more central Branford Harbor and Stony Creek Harbor on the east end, and one town beach at Branford Point. Much of the town's border with East Haven to the west is dominated by Lake Saltonstall, a reservoir owned by the South Central Connecticut Regional Water Authority, and Saltonstall Mountain, part of the Metacomet Ridge, a mountainous trap rock ridgeline that stretches from Long Island Sound to nearly the Vermont border. The southern terminus of the Metacomet Ridge, Beacon Hill, is located in Branford.

The town of Branford includes the Thimble Islands. Neighboring towns are North Branford to the north, Guilford to the east, and East Haven to the west.

An area called "Totoket", which became Branford, was part of the land bought from the Mattabesech Indians in 1638 by the first settlers of New Haven. The Dutch set up a trading post at the mouth of the Branford River in the 17th century, the source of the name "Dutch Wharf". 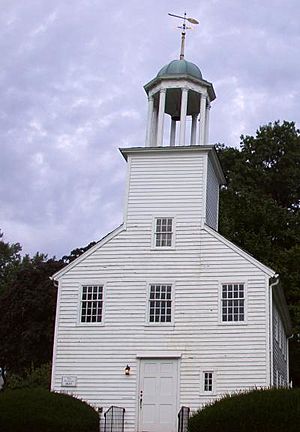 The town's name is said to be derived from the town of Brentford, England. The town in early maps was actually called Brentford before being shortened to Branford. Established in 1644, Branford grew during the 18th and 19th centuries. In the late 18th century, the first shoreline community, Stony Creek, was settled. Indian Neck and Pine Orchard were also settled, but neither of those settlements was permanent until the mid-19th century.

In 1974, Connecticut Hospice was founded in Branford, the first hospice in the United States. 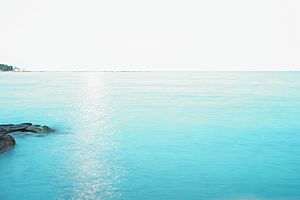 A beach in Branford, Connecticut, near Shore Drive.

More than 20 historic homes and other properties are separately listed on the National Register. In total, 30 properties or districts in Branford appear in New Haven County's NRHP listings. One example is Harrison House and Museum, a 1724 structure, which has period furnishings, local historical items, archives, a barn and an herb garden.

Cruises of the Thimble Islands depart from the Stony Creek dock, and seal-watch cruises take place in March.

Branford's recreational facilities include several town-maintained parks and beaches owned by private foundations, hiking trails along Lake Saltonstall and a stretch of the Shoreline Greenway Trail, and 20 miles (32 km) of coastline with more than 12 marinas.

Branford Center is home to many small stores, restaurants, and coffee houses, which line Main Street, with the Green at the center. The Branford Green has churches as well as the town hall and other government facilities and hosts concerts and other events, such as the annual Branford Festival. Traditionally, the graduating class from Branford High School graduates in front of the Town Hall, weather permitting.

Branford Hills sits on the western end of town and centers on the heavily commercialized strip of U.S. Route 1. Fast-food and sit-down restaurants, auto dealers, grocery stores, and several strip malls are located there. The more southern section features less dense areas with woodlands and farm featuring trails that the Branford Land Trust preserves that connect the Shoreline Greenway trail from New Haven to Madison. The northern section also features a less dense area with woodlands that surround Lake Saltonstall which also feature trail systems maintained by the Regional Water Authority, as the Lake is a reservoir for Branford.

Branford Hills features many condominium and apartment complexes. The original site of Connecticut Hospice (now the Monastery of the Glorious Cross - a semi-cloistered community of Benedictine nuns) is located in this area, on Burban Drive. Also on Burban Drive is St. Elizabeth of Hungary Roman Catholic Church, which was originally located in Short Beach.

Indian Neck is in the south-central section of Branford, dominated by a peninsula bordering Branford Harbor. Both Foote Park and John B. Sliney Memorial Park are located within Indian Neck.

Back in the early to mid 20th century Indian Neck was a tourist destination. Trolley service came down to Sybil and Limewood avenues, which had its own commercial area. These included Harry's General Store, Bud's Bait Box, and on Limewood Ave the Waverly Inn, Madelyn's Restaurant, Surfside Restaurant, a news, comics, candy, variety store named Lounsberry's, and Dairy Joy Ice Cream. Much of the area contained second homes, so the beach was an active place. As the area became more year-round the commercial business slowly shut down. The Montasco Inn, owned/operated for many years by the Poirot's was torn down in the 60's. The landmark Waverly Inn burned to the ground in the early 1970s truly marking the end of an era.

Stony Creek is a shore front neighborhood in the southeastern section of Branford, centered on a harbor on Long Island Sound. An eclectic community, Stony Creek has the ambiance of a small seaside village with a blend of various architectural style buildings and a few small retail establishments, sandwich shops, galleries and antique shop Stony Creek Depot

Just offshore from Stony Creek is an intriguing archipelago of islands known as the Thimble Islands. The Thimbles are a jumble of glacial rocks, ranging from 17 acres (6.9 ha) down to stepping-stone size, at the mouth of the harbor. Despite their small size, they possess a wealth of history and local lore, as well as providing pleasant scenery for a summer cruise.

Stony Creek is home to the all-male Stony Creek Fife & Drum Corps, and the only all-female fife and drum corps, Totoket Ancient Fife & Drum Corps. A large quarry is still working and supplied the distinctive pink/orange Stony Creek granite for the Brooklyn Bridge, the base of the Statue of Liberty, and the newest House Office Building in Washington, D.C.

Short Beach is a beach neighborhood in the western end of town, south of Branford Hills. It is home to many small private islands, the largest being Kelsey Island, which has a handful of small cabins used as summer homes. There is no public access (except for public tidal zones) to Kelsey Island and trespassing is not allowed. Short Beach is home to half of the famous Shore Line Trolley Museum, which is also in neighboring East Haven. Also in Short Beach are the Yale Corinthian Yacht Club (YCYC), Short Beach Union Church and three parks, the largest being Pardee Park. Short Beach's population is about 1,500 and features a three-day festival at the end of summer called Short Beach Days. Short Beach is known for the population of monk parakeets that live there (referred to as the "Short Beach Parrots"), a non-native bird.

Hotchkiss Grove of Branford is located between Indian Neck and Pine Orchard and consists of First through Ninth avenues, as well as parts of Hotchkiss Grove Road, Seaview Avenue, and Dudley Avenue. It has a small beach used for swimming and mooring boats and features a raft to swim out to. Bay Point Park (The Point) is a grassy peninsula going out into the water where there used to be a small pier. Occasionally residents of Hotchkiss Grove can rent the Point to host parties. Every first Saturday of August, Hotchkiss Grove Day is held, with the day starting with a costume parade, games, and prizes. In the afternoon there are beach games in which kids compete with one another on the beach, a clam bar, and live music. Dinner, a raffle, auction, and dancing close out the evening. Historically Hotchkiss Grove was a summer community with beach cottages and dirt roads; over the past two decades most of the cottages have been converted into permanent, year round residences.

The main artery through the town is Interstate 95, running along the eastern coast of the United States. The town has a station on the Shore Line East commuter rail line from New London to New Haven.

One of the largest events in Branford every year is the Branford Festival on Father's Day weekend, which features food, crafts, children's rides, music and a 5-mile (8.0 km) road race.

All content from Kiddle encyclopedia articles (including the article images and facts) can be freely used under Attribution-ShareAlike license, unless stated otherwise. Cite this article:
Branford, Connecticut Facts for Kids. Kiddle Encyclopedia.