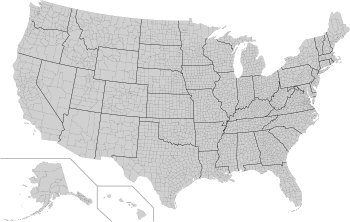 Map of the United States, showing the states, divided into counties.

The mid-western and northeastern states in the United States divide the county further into townships or towns, some of which have municipalities. The place where the county government and courts are is called the county seat.

These pages list all of the counties in each state:

*Louisiana is the only state in the United States that is divided into parishes instead of counties, but it does have 64 parishes.

All content from Kiddle encyclopedia articles (including the article images and facts) can be freely used under Attribution-ShareAlike license, unless stated otherwise. Cite this article:
County (United States) Facts for Kids. Kiddle Encyclopedia.