List of counties in New York facts for kids

There are 62 counties in the state of New York.

The first 12 were created immediately after the British took over the Dutch colony of New Amsterdam; two of these counties have since been abolished. The newest is Bronx County, created in 1914 from the portions of New York City that had been annexed from Westchester County in the late 19th century and added to New York County. New York's counties are named for a variety of Native American words; British provinces, counties, cities, and royalty; early American statesmen and military personnel; and New York State politicians.

The FIPS county code is the five-digit Federal Information Processing Standard (FIPS) code which uniquely identifies counties and county equivalents in the United States. The three-digit number is unique to each individual county within a state, but to be unique within the entire United States, it must be prefixed by the state code. This means that, for example, while Albany County is 001, Addison County, Vermont, and Alachua County, Florida, are also 001. To uniquely identify Albany County, New York, one must use the state code of 36 plus the county code of 001; therefore, the unique nationwide identifier for Albany County, New York, is 36001. The links in the column FIPS County Code are to the Census Bureau's "QuickFacts" page for that county.

In contrast to other counties of New York state, the powers of the five boroughs of New York City are very limited, and in nearly all respects are governed by the city government. Only a few officials are elected on a borough-wide basis, such as the five borough presidents, district attorneys, and some judges. There are no official county seats, but the locations of borough halls and courthouses bestow certain neighborhoods an informal designation as county seats within their boroughs: 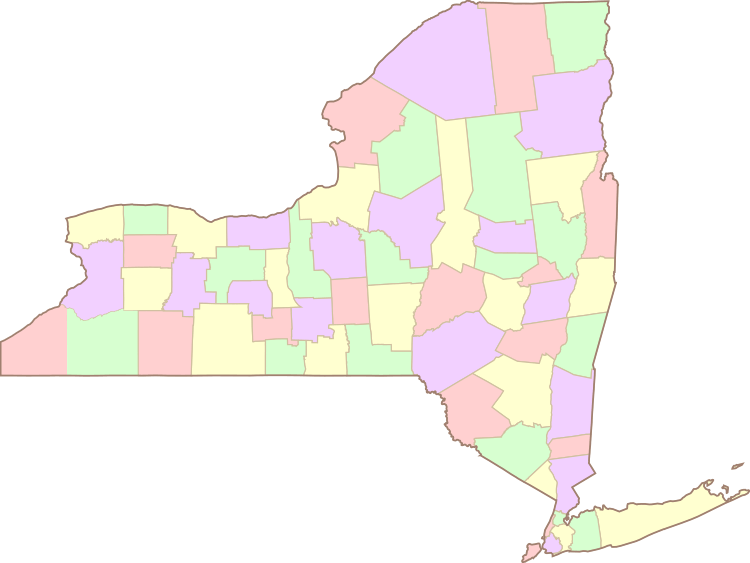 All content from Kiddle encyclopedia articles (including the article images and facts) can be freely used under Attribution-ShareAlike license, unless stated otherwise. Cite this article:
List of counties in New York Facts for Kids. Kiddle Encyclopedia.