Catherine of Braganza facts for kids

Kids Encyclopedia Facts
Not to be confused with Catherine, Duchess of Braganza.

Catherine of Braganza (Portuguese: Catarina de Bragança; 25 November 1638 – 31 December 1705) was Queen of England, Scotland and Ireland from 1662 to 1685, by marriage to King Charles II. She also served as regent of Portugal during the absence of her brother in 1701 and 1704-05, after her return to Portugal as widow. Catherine was born into the House of Braganza, the most senior noble house of Portugal, which became Portugal's royal house after Catherine's father, John, 8th Duke of Braganza, was proclaimed King John IV after deposing the House of Habsburg in 1640.

Owing to her devotion to the Roman Catholic beliefs in which she had been raised, Catherine was an unpopular consort for Charles II. She was a special object of attack by the inventors of the Popish Plot. In 1678 the murder of Sir Edmund Berry Godfrey was ascribed to her servants, and Titus Oates accused her of an intention to poison the king. These charges, the absurdity of which were soon shown by cross-examination, nevertheless placed the queen for some time in great danger. On 28 November Oates accused her of high treason, and the Commons passed an order for her removal and that of all Roman Catholics from Whitehall. A series of fresh depositions were made against her, and in June 1679 it was decided that she must stand trial; but she was protected by the king, which earned her gratitude.

She and Charles are credited with introducing the custom of tea drinking to the British court, which has been common amongPortuguese nobility.

Catherine is credited with the introduction of tea drinking to Britain, although Samuel Pepys makes reference to drinking tea for the first time in his diary entry for 25 September 1660 (i.e. prior to Catherine's emigration to England and marriage to Charles). It is more likely that she popularised the drink, which was unusual in Britain at the time. Beyond tea, her arrival brought and promulgated goods such as cane, lacquer, cottons, and porcelain. 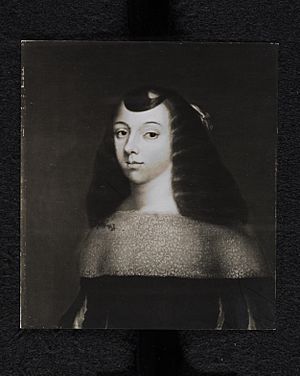 Queens, a borough of New York City, was supposedly named after Catherine of Braganza, since she was queen when Queens County was established in 1683. Queens' naming is consistent with those of Kings County (the borough of Brooklyn, originally named after her husband, King Charles II) and Richmond County (the borough of Staten Island, named after his illegitimate son, the 1st Duke of Richmond). However, there is no historical evidence that Queens County was named in her honor, neither is there a document from the time proclaiming it so.

Catherine's marriage had an important result for the later history of India and of the British Empire, though the Queen personally had little to do with it: soon after acquiring the Seven Islands of Bombay as part of her dowry, Charles II rented them to the East India Company which moved its Presidency there - resulting in Bombay/Mumbai eventually growing to become one of the main cities of India. 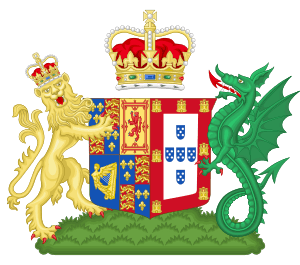 Catherine's coat of arms as queen consort of England

All content from Kiddle encyclopedia articles (including the article images and facts) can be freely used under Attribution-ShareAlike license, unless stated otherwise. Cite this article:
Catherine of Braganza Facts for Kids. Kiddle Encyclopedia.