The Glorious Revolution was an event in the history of England and Scotland in 1688. The people of England and Scotland did not like the Catholic King James II because he would not let them vote or practice the religion of their choice. They invited the Protestant William III of Orange-Nassau to take over as king. William was King James II's nephew and Mary's first cousin. He came to England with his wife Queen Mary, the daughter of King James II. They let the old king escape, and he moved to France out of fear. 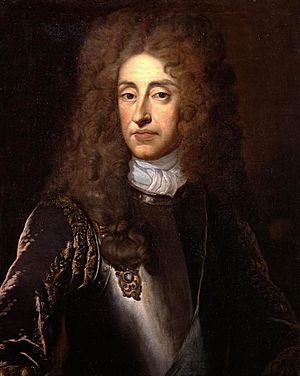 William signed the Bill of Rights and became king, and England became a constitutional monarchy.

On the surface, this is a story about religion. However, it is also about the balance between monarch and Parliament. A civil war had been fought because Charles I tried to rule as an absolute monarch. Charles II had been accepted back because he agreed to limit his powers. However, his brother, James II, made it clear he wanted to get back the absolute power that their father Charles I had.

When Charles II died without any legitimate children in 1685, his brother the Duke of York became King as James II in England and Ireland. He also became James VII in Scotland. He tried to give freedom of religion to non-Anglicans. He did this by making the acts of Parliament invalid by Royal Decree. The public did not like this. Several Protestant politicians and noblemen began talking with Mary's husband as early as 1687. In May 1688, James forced Anglican clergymen to read the Declaration of Indulgence. The Declaration of Indulgence was a statement that gave religious freedom to those who did not agree with the Church of England. This made him much less popular.

Protestants became even more fearful when James's wife, Mary of Modena, gave birth to a son–James Francis Edward–in June 1688. They were afraid because the son, unlike Mary and Anne, would be raised a Roman Catholic. Some said that the boy had been secretly carried into the Queen's room in a bed-warming pan instead of her stillborn baby. There was no strong proof to support this story, but Mary publicly doubted the boy's legitimacy. She sent a list of suspicious questions to her sister, Anne, about the boy's birth.

On 30 June, the Immortal Seven secretly asked William, who was in the Netherlands with Mary, to come to England with an army. William, who was jealous of Mary's position and power, did not want to go at first. But Mary told William that she did not care about political power. She said "she would be no more but his wife, and that she would do all that lay in her power to make him King for life".

William agreed to attack. He declared that James' newborn son was the "pretended Prince of Wales". He also gave a list of what the English people wanted, and said that he only wanted to have "a free and lawful Parliament assembled". The Dutch army, which had been turned back by a storm in October, landed on 5 November. The English Army and Navy went over to William. At this time, the English people's confidence in James was very low. They did not even try to save their King. On 11 December, the King tried to run away, but failed. He tried to run away again on 23 December. This second attempt was successful, and James escaped to France. He lived there in exile until his death.

Though Mary was sad because of the deposition of her father, William ordered her to look happy when they arrived in London. Because of this, people thought she was being cold to her father. James also thought his daughter was unfaithful to him. This hurt Mary deeply.

In 1689, a Convention Parliament called by the Prince of Orange came together to discuss what they should do. William of Orange felt uncomfortable about his position. He wanted to rule as a King, not simply as a husband of a Queen. The only example of joint monarchy was from the sixteenth century. This was Queen Mary I and the Spanish Prince Philip. When they married, it was agreed that Prince Philip would take the title of King. But Philip II was King only during his wife's lifetime. He also did not have much power. William wanted to remain King even after his wife's death. Some important people suggested making Mary the only ruler. But Mary, who was faithful to her husband, refused. 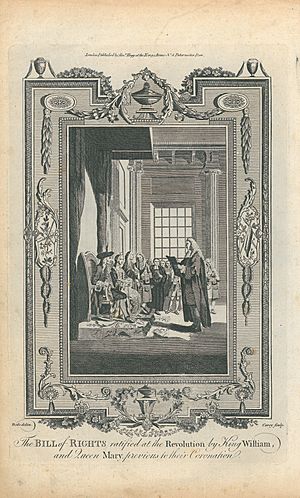 The Bill of Rights Ratified at the Revolution by King William, and Queen Mary, Previous to their Coronation (1783)

On 13 February 1689, Parliament passed the Declaration of Right. In this declaration, it said that James, by trying to run away on 11 December 1688, had abandoned the government, so no one at the time was king. Normally, James's oldest son, James Francis Edward would have been the heir. However, Parliament offered the crown to William and Mary as joint Sovereigns instead. But it was added that "The sole and full exercise of the regal (royal) power be only in and executed by the said Prince of Orange in the names of the said Prince and Princess during their joint lives." The declaration was later extended to take out all Catholics. This was because "It hath been found (discovered) by experience that it is inconsistent (not in harmony) with the safety and welfare of this Protestant kingdom to be governed by a papist prince".

William and Mary were crowned together at Westminster Abbey on 11 April 1689. The Archbishop of Canterbury usually performed coronations. But William Sancroft, the Archbishop at that time, felt that James II's removal had been wrong. Therefore, the Bishop of London, Henry Compton, crowned them instead. On the day of the Coronation, the Convention of the Estates of Scotland declared at last that James was no longer King of Scotland. William and Mary were offered the separate Scottish Crown. This was because the two kingdoms were not united until the Acts of Union in 1707. They accepted on 11 May.

Even after this was declared, there was still strong support for James in Scotland. John Graham of Clevehouse, the Viscount of Dundee, raised an army and won a victory at Killiecrankie on 27 July. But Dundee's army suffered great losses, and he was seriously wounded at the start of the battle. This stopped the only effective resistance to William, and the revolt was quickly crushed. The next month, there was a great defeat at the Battle of Dunkeld.

All content from Kiddle encyclopedia articles (including the article images and facts) can be freely used under Attribution-ShareAlike license, unless stated otherwise. Cite this article:
Glorious Revolution Facts for Kids. Kiddle Encyclopedia.