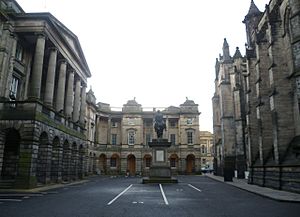 Parliament Square, Edinburgh, showing the Signet Library behind the statue of Charles II. The entrance to Parliament House is in the corner to the left of the library.

Parliament House in the Old Town in Edinburgh, Scotland, is a complex of several buildings housing the Supreme Courts of Scotland. The original building was home to the Parliament of Scotland from 1639 to 1707. It is located in the Old Town, just off the High Street section of the Royal Mile, beside St Giles' Cathedral. Buildings in the complex are Grade A listed buildings.

The oldest part of Parliament House is Parliament Hall, which the Town Council of Edinburgh, at its expense, had built as a permanent home for the Estates of Parliament, and as such is the oldest extant purpose-built parliamentary building in the British Isles. It was completed in 1639 to the design of James Murray. It has a dramatic hammer-beam roof constructed of oak from the Balgonie and Culross forests of Fife, thought to be the hardest and most durable in Scotland during that period. The roof of the former Tron Church in the High Street is similar. The roof of the new Scottish Parliament Building continues this tradition, and is supported by large laminated oak beams.

After the Act of Union 1707, the Estates of Parliament was adjourned, and the building ceased to be used for its original function. The Hall was used for the sitting of courts, but in recent times has been subject to restoration work and now remains open as a meeting place for lawyers. 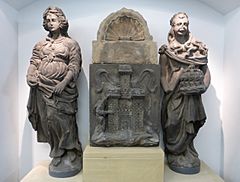 Figures of "Justice" and "Mercy".

The right-hand example of the two smaller fireplaces has carved scenes from The Merchant of Venice.

In a corridor beyond the south door of the hall stand figures of "Justice" and "Mercy" by Alexander Mylne (1637) which formerly stood over the main entrance on Parliament Square.

The Advocates' Library was founded in 1682, and is currently located in a William Henry Playfair-designed building to the west of the south end of Parliament Hall. It remains a heavily used legal resource. As well as collecting legal works, it was also a deposit library, and in 1925 the non-legal books in their collection were gifted to the new National Library of Scotland, which is located next to the library, on George IV Bridge.

To the west of the north end of Parliament Hall is The Signet Library. It is a private library, funded by members of The Society of Writers to Her Majesty's Signet, who are generally practising solicitors. Construction began in 1810 to a design by Robert Reid, and it presents a classical front to Parliament Square. This façade wraps around Parliament House as well, and replaced the existing Scottish baronial façade.

All content from Kiddle encyclopedia articles (including the article images and facts) can be freely used under Attribution-ShareAlike license, unless stated otherwise. Cite this article:
Parliament House, Edinburgh Facts for Kids. Kiddle Encyclopedia.