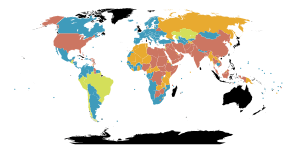 Death penalty, also called capital punishment, is when a government or state executes (kills) someone, usually but not always because they have committed a serious crime. A crime that can be punished with the death penalty is called a capital crime or a capital offense.

Executions in most countries have become rarer in recent centuries. The death penalty is a disputed and controversial topic.

Most of the countries that have a death penalty use it on murderers, and for other serious crimes such as terrorism. Other countries especially ones with Authoritarian or Totalitarian governments, however, also use it for smaller crimes like theft, drugs, or for saying bad things about the government.

All content from Kiddle encyclopedia articles (including the article images and facts) can be freely used under Attribution-ShareAlike license, unless stated otherwise. Cite this article:
Death penalty Facts for Kids. Kiddle Encyclopedia.