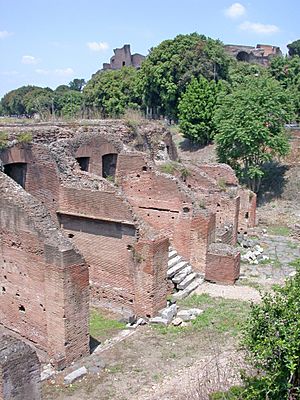 This is what is left of the visitor tribune in the south, today

The Circus Maximus (Latin for greatest or largest circus, in Italian Circo Massimo) is an ancient Roman chariot racing stadium and mass entertainment venue located in Rome, Italy. Situated in the valley between the Aventine and Palatine hills, it was the first and largest stadium in ancient Rome and its later Empire. It measured 621 m (2,037 ft) in length and 118 m (387 ft) in width and could accommodate over 150,000 spectators. In its fully developed form, it became the model for circuses throughout the Roman Empire. The site is now a public park. 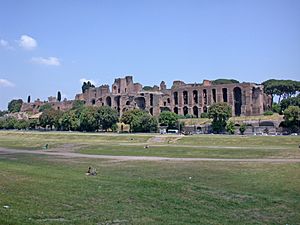 The Circus Maximus is a park today.In the background are the ruins of the Imperial palace on the Palatine hill

The Circus was Rome's largest venue for public games connected to Roman religious festivals. Games were sponsored by leading Romans or the Roman state for the benefit of the Roman people (populus Romanus) and gods. Most were held annually or at annual intervals on the Roman calendar.

Ludi ranged in duration and scope from one-day or even half-day events to spectacular multi-venue celebrations held over several days, with religious ceremonies and public feasts, horse and chariot racing, athletics, plays, recitals and gladiator fights. 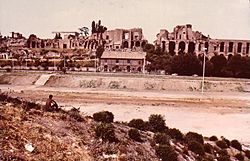 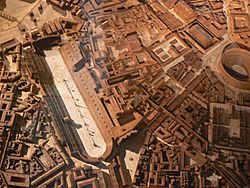 After the 6th century, the Circus fell into disuse and decay, and was quarried for building materials. The lower levels, ever prone to flooding, were gradually buried under waterlogged alluvial soil and accumulated debris, so that the original track is now buried 6m beneath the modern surface. In the 12th century, a watercourse was dug there to drain the soil, and by the 1500s the area was used as a market garden. The Circus site now functions as a large park area, in the center of the city. It is often used for concerts and meetings.

All content from Kiddle encyclopedia articles (including the article images and facts) can be freely used under Attribution-ShareAlike license, unless stated otherwise. Cite this article:
Circus Maximus Facts for Kids. Kiddle Encyclopedia.