Tiberius (Tiberius Julius Caesar Augustus, 16 November 42 BC – 16 March 37 AD) was the second Roman Emperor. He ruled from 14 to 37 AD. He was the step-son of Caesar Augustus.

Tiberius was one of Ancient Rome's greatest generals, whose campaigns protected the northern frontier. He reigned for 22 years, and the first part of his imperial work was excellent. Later, he came to be remembered as a dark, reclusive, and somber ruler. After the death of his son Drusus in 23, the quality of his rule declined and ended in terror.

In 26, Tiberius moved from Rome to the Isle of Capri, and left administration largely in the hands of his unscrupulous Praetorian Prefect Sejanus. Sejanus became the effective ruler of Rome, and plotted against Tiberius, murdering people who opposed him. When alerted, Tiberius counter-plotted to remove Sejanus from his official positions, and eventually executed him. More executions followed of people who had committed crimes under Sejanus' rule.

Caligula, Tiberius' grand-nephew and adopted grandson, succeeded the Emperor upon his death.

Tiberius shared in Augustus' tribune powers as of 6 BC, but soon went into retirement in Rhodes. He was reported as wanting no further role in politics.p117p46 After the early deaths of Augustus' young grandchildren-turned-sons, Lucius and Gaius in AD 2 and 4 respectively, and the earlier death of his own brother Drusus (9 BC), Tiberius was recalled to Rome in June AD 4, where he was adopted by Augustus on the condition that he, in turn, adopt his nephew Germanicus.p119 This continued the tradition of presenting at least two generations of heirs.

In the same year, Tiberius was also granted the powers of a tribune and proconsul, emissaries from foreign kings had to pay their respects to him, and by 13 was awarded with his second triumph and equal level of imperium with that of Augustus.p119/120 Tiberius duly assumed the titles of Augustus when the old man's long reign came to an end in AD 14.

Problems soon arose. The northern legions had not been paid, and rebelled. Germanicus and Tiberius's son, Drusus, were dispatched with a small force to quell the uprising and bring the legions back in line. Germanicus rallied the mutineers and led them on a short campaign across the Rhine into Germanic territory, stating that whatever treasure they could grab would count as their bonus. Germanicus's forces smashed across the Rhine and quickly occupied all of the territory between the Rhine and the Elbe. So Germanicus dealt a significant blow to Rome's enemies, and quelled an uprising of troops, actions that increased his fame with the Roman people.

After being recalled from Germania, Germanicus celebrated a triumph in Rome in AD 17, the first full triumph that the city had seen since Augustus's own in 29 BC. As a result, in AD 18 Germanicus was granted control over the eastern part of the empire, just as both Agrippa and Tiberius had received before, and was clearly the successor to Tiberius. But tragedy struck once again, as Germanicus died after a year, apparently poisoned.

A Roman aureus (gold coin) struck in AD 36, depicting Tiberius, with Livia as Pax (peace) on the reverse

Sejanus had served the imperial family for almost twenty years when he became Praetorian Prefect in AD 15. The death of Drusus elevated Sejanus. Tiberius had statues of Sejanus erected throughout the city, and Sejanus became more and more visible as Tiberius began to withdraw from Rome altogether. Finally, with Tiberius's withdrawal to Capri in AD 26, Sejanus was left in charge of the entire state mechanism and the city of Rome.

Sejanus's position was not quite that of successor. The presence of Livia (the third wife and advisor of Augustus) seems to have checked his power for a time. Her death in AD 29 changed all that. Sejanus began a series of purge trials of Senators in Rome. Germanicus's widow Agrippina the Elder and two of her sons were arrested and exiled in AD 30 and later all died in suspicious circumstances. 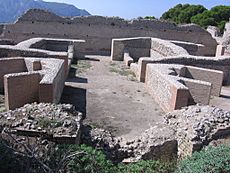 Ruins of the Villa Jovis at Capri, where Tiberius spent many of his final years, leaving control of the empire in the hands of the prefect Sejanus

In response, Tiberius manoeuvered cleverly. He knew an immediate condemnation of Sejanus might not succeed. Since he and Sejanus were then joint Consuls, Tiberius resigned his post of Consul, which forced Sejanus to do likewise. This removed much of Sejanus' legal powers and protection. Then, in AD 31, Sejanus was summoned to a meeting of the Senate, where a letter from Tiberius was read condemning Sejanus and ordering his immediate execution. Macro was appointed Praetorian Prefect, with the specific job of removing Sejanus. Sejanus was tried, and he and several of his colleagues were executed within the week.

More treason trials followed. Tacitus writes that Tiberius had been hesitant to act at the start of his reign, but now, towards the end of his life, he seemed to do so without compunction. However, Tacitus' portrayal of a tyrannical, vengeful emperor has been challenged by several modern historians. The prominent ancient historian Edward Togo Salmon notes in his work, A history of the Roman world from 30 B.C. to A.D. 138:

"In the whole twenty two years of Tiberius' reign, not more than fifty-two persons were accused of treason, of whom almost half escaped conviction, while the four innocent people to be condemned fell victims to the excessive zeal of the Senate, not to the Emperor's tyranny".

The last years of Tiberius were notable for his complete absence from Rome, and his inactivity as Emperor. He was now an old man in his 70s, and left decisions to the officials in Rome. He did nothing to prevent the rise of his grandnephew Caligula, who was now popular with the people (as the only surviving son of germanicus) and who had the support of the Prefect Macro. In 35, Tiberius would make both caligula and his own grandson Gemellus joint heirs, before dying two years later, in his 78th year. Some speculate Macro and Caligula hastened the old emperor’s death. Regardless, Caligula would succeed Tiberius as emperor.

All content from Kiddle encyclopedia articles (including the article images and facts) can be freely used under Attribution-ShareAlike license, unless stated otherwise. Cite this article:
Tiberius Facts for Kids. Kiddle Encyclopedia.