Luke the Evangelist facts for kids 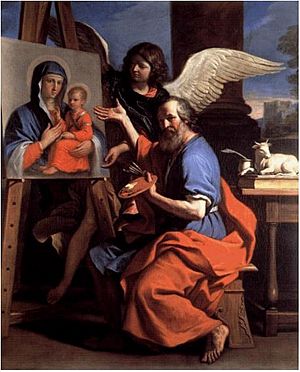 Luke the Evangelist by Guercino

Luke the Evangelist is said to be the man who wrote the Gospel of Luke and Acts of the Apostles in the New Testament of the Christian Bible. Irenaeus, Eusebius of Caesarea and Jerome say that he was a friend of Saint Paul and a doctor, and that he accompanied Paul on some of his travels. These people also say that he was of Greek origin, from Antioch in Syria.

Modern-day scholars think that the person that wrote the two books was not the same that accompanied Paul. Paul had a theology that was special, and slightly different from that of other writers of the New Testament. The two books written by Luke never refer to this theology. Also, the name of Paul's companion is never linked to writing the two books. The Acts of the Apostles often tell things about Paul which Paul does not tell himself in his letters.

Luke wrote about the Three Wise Men who visited Jesus in the Bible. Luke never said there were 3 wise men, only wise men from the east.

All content from Kiddle encyclopedia articles (including the article images and facts) can be freely used under Attribution-ShareAlike license, unless stated otherwise. Cite this article:
Luke the Evangelist Facts for Kids. Kiddle Encyclopedia.