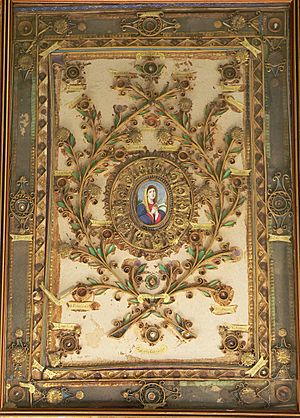 Some of the Roman Catholics relics are two thousand years old

A relic is an object, especially a piece of the body or a personal item of someone of religious importance, that was carefully preserved with an air of veneration as a memorial that you can touch. Relics are an important aspect of Buddhism, some denominations of Christianity, Hinduism, shamanism, and many other personal belief systems.

The word relic comes from the Latin reliquiae ('remains'). A reliquary is a shrine that houses one or more relics.

Some well-known religious relics include the Tooth of Buddha, the Holy Grail, the Crown of Thorns, the True Cross of Jesus, the Staff of Moses, and the Sword of Mohammed.

All content from Kiddle encyclopedia articles (including the article images and facts) can be freely used under Attribution-ShareAlike license, unless stated otherwise. Cite this article:
Relic Facts for Kids. Kiddle Encyclopedia.