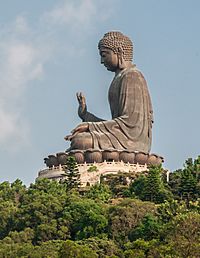 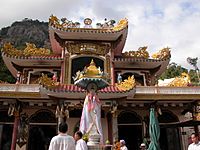 Buddhism originated in India, based on the teachings, of Siddhartha Gautama, later known as Gautama Buddha. A Buddha is one who is said to be awake to the truth of life.

Over the centuries his teachings spread from Nepal to Central Asia, Tibet, Sri Lanka, Southeast Asia, China, Mongolia, Korea, Japan, and now Europe and North and South America. Theravada Buddhism is most common in South Asia; Mahayana further north. Buddhism exists in many different strands today, but all schools and sects share basic ideas. About seven percent of the people of the world are Buddhist.

While many people see Buddhism as a religion, others see it as a philosophy, and others as a way of finding reality.

Siddhartha Gautama (563–483 BC) began life as the infant prince of a small kingdom in what is now the southern part of Nepal. As an adult he left wealth and status behind to search for truth. Enlightened at the age of 35, the Buddha spent the next 45 years of his life traveling and teaching in the northern part of India. He died at the age of 80.

The Buddha focused much of his teaching on how to overcome suffering. He saw that all living things suffer in being born, in getting sick, in growing old, and in facing death. By overcoming suffering, he taught, a person will be truly happy.

Early teaching. His first lesson after becoming enlightened was to other seekers who had also renounced the world. This was a group of holy men or monks with whom the Buddha had studied for five or more years. To them he first presented what he saw as the Four Noble Truths of life and the Eightfold Noble Path (see below). These teachings identify the causes of suffering and their cure.

Three marks of existence. The Buddha taught that life is best understood as being impermanent (everything changes), unsatisfactory (left on our own we are never truly happy), and interdependent (all things are linked, even to the degree that the self is better understood as an illusion).

The middle way. Buddhism teaches non-harm and moderation or balance, not going too far one way or the other. This is called the Middle Way, and encourages people to live in balance.

Meditation. The Buddha recommended meditation as a way to discipline the mind and see the world as it is. Buddhists may meditate while sitting in a special or specific way. Standing and walking meditation are other styles.

Nirvana. The complete letting go of negative influences is called Nirvana, meaning "to extinguish," like putting out the flame of a candle. This end of suffering is also called Enlightenment. In Buddhism, Enlightenment and Nirvana often mean the same thing.

Do Buddhists believe in god or gods? The Buddha would not say if gods exist or not, although gods play a part in some Buddhist stories. If someone asked the Buddha, "Do gods exist?" he maintained a noble silence. That is, he would not confirm or deny. Buddhists do not believe that people should look to gods to save them or bring them enlightenment. Rather individuals should work out their own path the best they can.

Other basic teachings. Many of the Buddha's ideas are found in other Indian religions, especially Hinduism.

To avoid all evil
To do good.
To purify one's mind:
Speaking in a kind way, free from lies and angry words.

Buddha is a Pali word which means "The awakened one". Someone who has woken up to the truth of the mind and suffering and teaches the truth to others is called a Buddha. The word "Buddha" often means the historical Buddha named Buddha Shakyamuni (Siddhartha Gautama). Buddhists do not believe that a Buddha is a god, but that he is a human being who has woken up and can see the true way the mind works. They believe this knowledge totally changes the person. This person can help others become enlightened too. Enlightened people are beyond birth, death, and rebirth.

According to Buddhism, there were countless Buddhas before Gautama Buddha and there will be many Buddhas after him.

In Pali texts, the first Buddha in Buddhavamsa sutta was Taṇhaṅkara Buddha. The Mahapadana sutta says the earliest Buddha of the recent seven buddhas was Vipassi Buddha (But sutta is not saying that Vipassi is first Buddha). Counting from the present kalpa (the beginning of our present world (Earth)) Gautama Buddha is considered the fourth Buddha. In this telling, the first is Kakusandho Buddha, second Konakamano Buddha, and the third Kassapo Buddha. The last Buddha of this kalpa will be Maitreya Buddha. Then the world (Earth) will renew itself and from then begins a new kalpa.

Buddhists respect and treasure the Three Jewels, which are the Buddha, the Dharma, and the Sangha.

The Buddha refers to the awakened one, the Dharma to the Buddha's teachings, and the Sangha to the people who follow the Buddha and his teachings.

Buddhists say "I take refuge in the Buddha, the Dharma, and the Sangha." They find comfort in these jewels or treasures.

Buddhists are encouraged to follow five precepts, or guidelines. The Buddha taught that killing, stealing, having sex in a harmful way, and lying are not signs of skill.