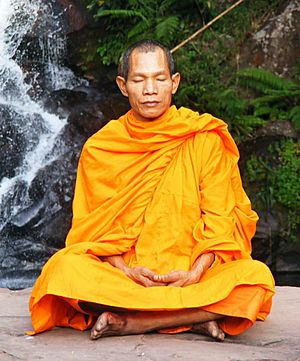 Meditation is to try to get past the "thinking" mind, and into a deeper state of relaxation or awareness.

Meditation is a common practice in many religions including Buddhism, Christianity (sometimes), Hinduism (where Yoga is important) and other religions.

The transcendental meditation technique recommends practice of 20 minutes twice per day. Some techniques suggest less time, especially when starting meditation, and Richie Davidson has quoted research saying benefits can be achieved with a practice of only 8 minutes per day. Some meditators practice for much longer, particularly when on a course or retreat. Some meditators find practice best in the hours before dawn. 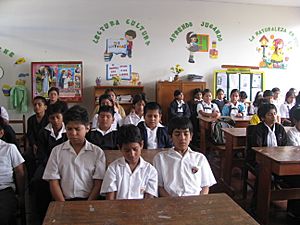 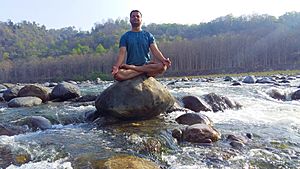 Whilst positions such as the full-lotus, half-lotus, Burmese, Seiza, and kneeling positions are popular in Buddhism, Jainism and Hinduism, other postures such as sitting, supine (lying), and standing are also used. Meditation is also sometimes done while walking, known as kinhin, or while doing a simple task mindfully, known as samu.

Use of prayer beads

Some ancient religions of the world have a tradition of using prayer beads as tools in devotional meditation. Most prayer beads and Christian rosaries consist of pearls or beads linked together by a thread. The Roman Catholic rosary is a string of beads containing five sets with ten small beads. The Hindu japa mala has 108 beads (the figure 108 in itself having spiritual significance, as well as those used in Jainism and Buddhist prayer beads. Each bead is counted once as a person recites a mantra until the person has gone all the way around the mala. The Muslim misbaha has 99 beads.

Possible benefits of supporting meditation practice with a narrative

Richie Davidson has expressed the view that having a narrative can help maintenance of daily practice. For instance he himself prostrates to the teachings, and meditates "not primarily for my benefit, but for the benefit of others."

In Buddhism, three things are very important: being a good person, making the mind stronger, and understanding why people are in pain (Dukkha).

For Buddhists, meditation is used to calm the mind so that the mind can better see the cause of pain. Buddhists believe that this type of seeing can end pain.

Most types of Buddhist meditation focus on something. The most popular things to focus on include the breath, love, other emotions, and religious images and sounds.

Christians sometimes meditate by thinking about small parts of the Bible, or by saying the words of a prayer to themselves over and over.

All content from Kiddle encyclopedia articles (including the article images and facts) can be freely used under Attribution-ShareAlike license, unless stated otherwise. Cite this article:
Meditation Facts for Kids. Kiddle Encyclopedia.