The religious movement can be found at International Society for Krishna Consciousness. 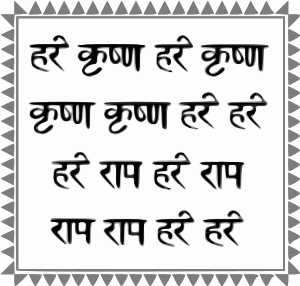 Hare Krishna is a mantra. It is also known as Maha Mantra. The mantra was made well known even outside Hinduism by the International Society for Krishna Consciousness. The mantra can be found in many Hinduist traditions in India. Those who believe in it think that when the mantra is heard, spoken, used for meditation or sung this can lead to a higher state of consciousness. According to Gaudiya Vaishnava theology, this higher consciousness takes the form of pure love of God (Krishna). The mantra is contained in the texts of Hinduism known as the Upanishads, which are considered by some scholars to have roots in the Vedic past.

All content from Kiddle encyclopedia articles (including the article images and facts) can be freely used under Attribution-ShareAlike license, unless stated otherwise. Cite this article:
Hare Krishna Facts for Kids. Kiddle Encyclopedia.