Kids Encyclopedia Facts
This page is about "God" in the context of monotheism. For the general concept of "a god", see Deity. 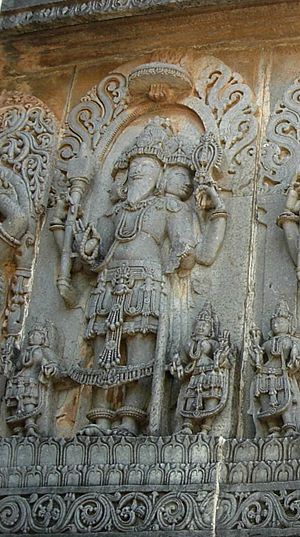 Brahma is the creator god in Hinduism. Brahma, Shiva and Vishnu are the most important Hindu gods. This image shows Brahma on a temple wall. 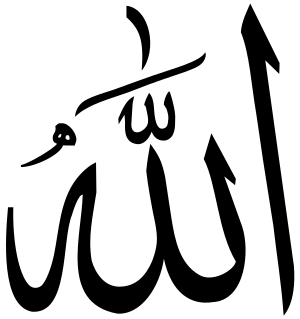 Allah which means God written in the Arabic language

According to certain philosophies, religions and mythologies, God is the creator of the Earth and of everything else. Hinduism says that there is one God who can come in many forms. Theists believe that God created everything that exists and has ever existed. In most religions, God is believed to be immortal (cannot die), and to have unlimited power. The belief that God or gods exist is usually called theism. People who reject belief that God or any deities exist are called atheists. Agnostics think we cannot know for sure whether God or gods exist, but still might (or might not) believe at least one deity exists. People who believe in God but not in traditional religions are called deists. People who believe that the definition of "God" should be defined before taking a theological position are ignostic.

In some religions there are many gods. This is called polytheism. They may or may not believe in a Supreme Being above the gods. Some polytheistic religions are Hinduism, Shinto, Taoism, Wicca and variants of Buddhism that syncronised with traditional folk religions it came into contact with. The belief that there is only one god is called monotheism. People who only believe in one god usually write God with an uppercase first letter. Some monotheistic religions are Christianity, Judaism, Islam, Bahá'í Faith and Sikhism. In English the word "gods" is written in lowercase letters. God is usually written with an uppercase letter when it refers to the Supreme Being. Some polytheists also use uppercase when talking about their most important god.

Many people have asked themselves if God exists. Philosophers, theologians, and others have tried to prove that it exists, and others have tried to disprove the theory. In philosophical terminology, such arguments are about the epistemology of the ontology of God. The debate exists mainly in philosophy, as science does not address whether or not supernatural things exist.

There are many philosophical issues with the existence of God. Some definitions of God are not specific. Arguments for the existence of God typically include metaphysical, empirical, inductive, and subjective types. Some theories are built around holes in evolutionary theory, as well as order and complexity in the world. Arguments against the existence of God typically include empirical, deductive, and inductive arguments. Conclusions sometimes include: "God does not exist" (strong atheism); "God almost certainly does not exist" (de facto atheism); "no one knows whether God exists" (agnosticism); "God exists, but this cannot be proven or disproven" (deism or theism); and "God exists and this can be proven" (theism). There are many variations on these positions, and sometimes different names for some of them. For example, the position "God exists and this can be proven" is sometimes called "gnostic theism" or "strong theism".

There are different names for God in different religions. Some examples are Yahweh, Elohim in Judaism and Christianity, Allah in Islam, Baha in Bahá'í Faith, and Ahura Mazda in Zoroastrianism. 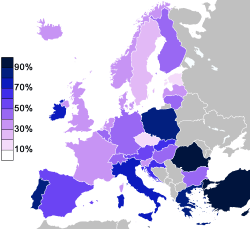 The percentage of people in European countries who said in 2005 that they "believe there is a God". Countries with Eastern Orthodox (i.e.: Greece, Romania, etc.) or Muslim (Turkey) majorities tend to poll highest.

By the year 2000, approximately 53% of the world's population were part of one of the three main Abrahamic religions (33% Christian, 20% Islam, less than 1% Judaism), 6% with Buddhism, 13% with Hinduism, 6% with traditional Chinese religion, 7% with various other religions, and less than 15% as non-religious. Most of these religious beliefs involve God or gods. Some religions do not believe in god or do not include the concept of god.

God in the Abrahamic religions

Abrahamic religions are very popular monotheistic ones. Well-known Abrahamic religions include Judaism, Christianity, and Islam. Monotheistic means the people in these religions believe there is only one God. The name of God is usually not allowed to be said in Judaism, but some Jews today call him YHWH (Yahweh) or Jehovah. Muslims say the word Allah, which is the Arabic word for "God."

Believers in the Abrahamic religions (except Islamic believers) believe that God has created human beings in his image, but this idea is not easily understood by humankind. One artistic idea is that of an wise elder man in use since the Renaissance.

The Christian Holy Bible talks about God in different ways. Within Christian canon the Old Testament talks about "God the Father", whilst the New Testament is about Jesus, or "God the Son". Many Christians believe that Jesus was God's incarnation on Earth. Christians consider the Holy Spirit to be God as well, the third person of God.

In the New Testament, there are three beings who are said to be God in different forms: the Father, the Son, and the Holy Spirit (also known as the Holy Ghost). This is called the Holy Trinity. Although the word "Trinity" is not in the Bible, the word used for God in chapter one of Genesis is actually plural, and the phrase "in the name of the Father, Son and Holy Spirit' is used in the New Testament, (e.g. Matthew 28:19). Another word that Christians believe has exactly the same meaning as "Trinity" is the word "Godhead", which is in the Holy Bible.

Christians believe that God incarnated in a human body, through the normal birth process, normally growing up into a man named Jesus or (Yeshua), coming to Earth specifically to give every person an opportunity of salvation from their own evil, called sin. The effect of personal evil far transcends the repercussions humans cause to one another in the world, but affects one's relationship with God the Father, and that aspect of the self cannot be addressed through one's own self-improvement efforts, but requires God to intervene in order to set one right. When Jesus prayed and talked to God, he called him "Father," and taught others to do the same.

Jesus also taught that one must be born again in order to receive God's Spirit, otherwise one remains separated from God, acting merely from their own mind, thus being vulnerable to deception by human philosophies or the many spiritual philosophies which do not come from God but from Fallen angels, which are within various false religions. After a person consciously accepts the free gift of eternal life, which Jesus's sacrifice offers, God comes to live in the individual, as God lived in humankind before the Fall.

Some Hindus also believe that the spirit of God lives in everyone. This idea is called Advaita Vedanta, which is the Hindu term for Monism.

Religions like Buddhism and Confucianism involve the worship of many gods, or sometimes no gods at all.

In Shinto, there is not a single specific God, as is in most religions, but instead, a wide variety of deities called kami, they are the spirit and essence of all nature things, both animate and inanimate, even including rocks, trees and poetry, for example. As Shinto is a polytheistic religion, it is usually believed that there are eight-million Kami (八百万の神 yaoyorozu-no-kami), in the Japanese language, the number "eight-million" is normally used to mean infinity.

Philosophers can talk about God or god; sometimes they talk about a specific god, but other times they are just talking about the idea of god.

One of the earliest Western philosophers to write about God in a monotheistic way was the Greek Aristotle, who describes god as the Supreme Cause. Aristotle saw God as a being that makes everything happen, but is not influenced by anything else.

The idea of an "all powerful" God raises some interesting questions. One of them is called the God paradox. It asks whether God can make a mountain (or rock) that is so heavy he cannot lift it. The question considers if a god "who can do anything" could do two things that are mutually contradictory.

There have been several attempts to prove the existence of God with logic. Blaise Pascal said that it is better to believe there is a god, than to believe there isn't. This argument is known as Pascal's wager today. Note that Blaise Pascal was a mathematician, and he used this argument to illustrate the concept of expected value in statistics. Other attempts known as the ontological argument, the cosmoolgical argument, and teleological argument today. Kurt Gödel formulated an argument for the existence of God using modal logic in the 1970s.

All content from Kiddle encyclopedia articles (including the article images and facts) can be freely used under Attribution-ShareAlike license, unless stated otherwise. Cite this article:
God Facts for Kids. Kiddle Encyclopedia.