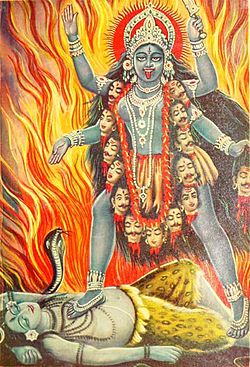 Kali is one of the goddesses in Hinduism and aspect of Parvati. She is the goddess of creation, destruction, time and commonly presented as dark and violent. Various Shakta Hindu cosmologies, as well as Shakta Tantric beliefs, worship her as the ultimate reality or Brahman. Kali is represented as the consort of Lord Shiva, on whose body she is often seen standing. She is associated with many other Hindu goddesses like Durga, Bhadrakali, Sati, Rudrani, Parvati and Chamunda. She is the foremost among the Dasa Mahavidyas, ten fierce Tantric goddesses.

Origin of the word "Kali"

The name Kali comes from kāla (meaning black, time, death, lord of death, Shiva). Kālī is the feminine of kāla ("black, dark coloured"). Kāla primarily means "black," but also means "time." Kālī means "the black one" and also "time", "beyond time" and "power of time". Since Shiva is called Kāla - the eternal time, Kālī, his consort, also means "the Time" or "Controller of Time". Hence, Kali is considered the goddess of time and change. She has many names like Kālarātri ("black night"), Kālikā ("relating to time"), or Bhadrakali ("a gentle form of Kali").

All content from Kiddle encyclopedia articles (including the article images and facts) can be freely used under Attribution-ShareAlike license, unless stated otherwise. Cite this article:
Kali Facts for Kids. Kiddle Encyclopedia.